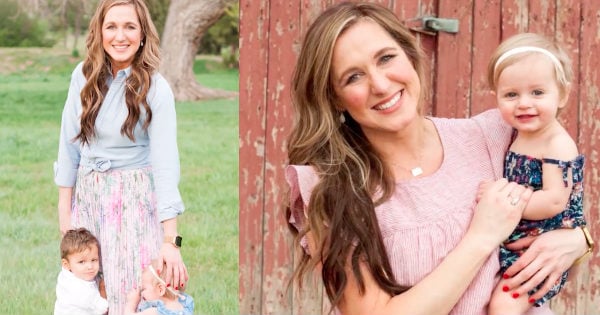 Chris and Jenny Marr were thrilled to learn they were being blessed with a baby, but they became understandably nervous to hear they would be having quadruplets! Not only do neither of them have any siblings of their own, but they don't know of any multiples on either side of their family. And to add to their worries, Jenny would be giving birth during the COVID-19 outbreak. But these parents were relieved to bring home miraculous identical quadruplets in the midst of the pandemic.

After the initial doctor's visit, the couple learned they would be having triplets. They got used to the idea and learned during another trip to the doctor that there was actually a fourth child. This news came when they visited their maternal-fetal medicine department. Some parents may immediately welcome that news with joy, but not Chris and Jenny. At first, they were scared.

RELATED: Single Mom With Triplets Gets Unexpected Help After Stranger Hears The ‘Urgency In Her Voice'

In their feeling of being overwhelmed, Chris explained to the Washington Post, "It sounds horrible to say, but I don't know if it was necessarily tears of joy." Part of their worry came from learning all babies were sharing a placenta. One baby could inadvertently take nutrients away from the others, leaving them weak.

To alleviate the parents' concerns, the doctors assured them if that happened that surgery could help the babies become healthy again.

Jenny went into labor early, at 28.5 weeks, right at the beginning of the pandemic.

On March 15, Jenny had a C-section procedure and gave birth to Hudson, Henry, Hardy, and Harrison. All were born within three minutes of one another.

"They each have little bitty characteristics," Chris shared. "When we sit down and look at them we can figure out who they are but if you just look at them from a distance, they all look the same."

Their children were in a neonatal intensive care unit for ten weeks, and three needed oxygen support. But at long last, they were happily sent home in May.

As the family of six settles at home with a new life ahead, Chris and Jenny find funny ways to tell their sons apart. This story is a reminder that there are so many positive things happening during the pandemic. And we should also be reminded in our times when we are most concerned to trust God. Chris and Jenny's initial worry ultimately turned into a cause for great joy.

Let's have hope and trust that God can work great things in our lives no matter the circumstances we face. God might just bring us a pleasant surprise.