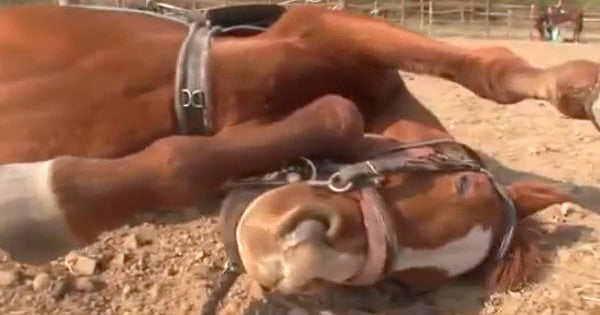 When folks saw Phoenix the dog wandering the streets in Oklahoma, they instantly assumed he’d suffered at the hands of a human. But the rescuers who took Phoenix in uncovered the cause behind his disfiguration. And now he’s getting the treatment he needs, along with the love and care he deserves!

When residents noticed Phoenix the dog roaming the streets of Collinsville, Oklahoma, it was clear he needed help. No one knew the story behind his disfigured appearance, but many assumed he was the victim of some kind of horrible abuse.

RELATED: True Story Behind Dog With Pig Face And The Inspirational Short Story Of His Rescue

The special angels of Skiatook Paws & Claws Animal Rescue took Phoenix in and Family Animal Medicine-Owasso, OK jumped in to provide medical care. They immediately started working on giving Phoenix some relief. They also began trying to figure out how his face had become disfigured.

Phoenix tonight with his rescuers!!! He is quite possibly the most photogenic dog there is 😍😍😍 #theriseofphoenix #pitbull #pitbullsofinstagram #rescuedog

Support For Dog With Disfigured Face

Lots of concerned citizens feared Phoenix the dog was a victim of abuse. And understandably, they were outraged. But the veterinary staff urged folks to resist jumping to conclusions.

“It is possible there may be a medical disease causing his disfiguration. It is important that we do not automatically assume malicious acts. Animals without homes and proper care, without shelter, food, and water face so many obstacles; especially if they have an underlying medical issue," they said.

RELATED: Abused Pup Left With Only Half A Face Still Has A Heart Full Of Love

So many dedicated themselves to caring for Phoenix the dog as the medical staff sought answers for his unique appearance. But one thing was evident right from the start.

While Phoenix may look a little scary, his heart was filled with nothing but love!

A flood of support and interest poured in the from the community. People donated money to help with Phoenix’s care and regularly asked for updates.

The rescuers happily showed off the beautiful spirit of Phoenix the dog!

WATCH: Phoenix The Dog Is Fired Up!

And after lots of tests and consultations, they finally an explanation for the pup’s disfigured face.

“Because it is an auto-immune disease, his own body attacks itself, making treatment sometimes difficult and tricky,” Skiatook Paws & Claws Animal Rescue posted in an update. “But thank goodness for all the vets (here in Owasso and Kansas too) we now have his disease managed.”

Happy Ending For Phoenix The Dog

Since saving him in November of 2019, the rescue group says Phoenix is improving every day. He has gained weight and his skin is healing. And with trustworthy humans caring for him, Phoenix can now focus on being just a normal dog.

“He plays and barks — he chases balls and plays tug-o-war. He even sleeps on his own dog couch,” Skiatook Paws & Claws reports.

Some things will never heal for Phoenix. The muscles on his head will never return, he’ll always have the same “sharky” grin, and his skin remains sensitive to light and UV-rays (hence his cool threads).

But one thing is for sure. Phoenix the dog is strong! And he’s loving life now that he has a safe play to rest his head and plenty of people to dote on him.

Phoenix With 1 Of His Favorite Friends

Phoenix with one of his best buds before his big media day the other day!! We are so glad to spread awareness on behalf of Phoenix. Awareness for stray dogs, pit bulls, and dogs and people who might not look the same as you. Phoenix has a lot of life lessons to teach us…to be the car that stops on the side of the road on your way to work to try and help..or to be the person to educate someone who is ignorant about the pit bull breed, or even to understand people that are different looking just a little bit more. Phephe's love is not prejudice, and ours shouldn't be either ❤️❤️ updates on health and wellness later..happy Saturday phefighters 😏 #theriseofphoenix #pitbull #pitbullsofinstagram #rescuedog #phefighters

The special angels at Skiatook Paws & Claws Animal Rescue will continue to care for the sweet pup. And once he’s deemed medically ready, they will oversee his adoption. But with his rare and difficult disease, there’s a good chance one of his vets may end up adopting him. Apparently, he already does many “sleepovers” with his main veterinarian.

And considering all he’s been through, Phoenix the dog truly is an inspiration! And we’re just so glad he’s now safe, sound, and LOVED!