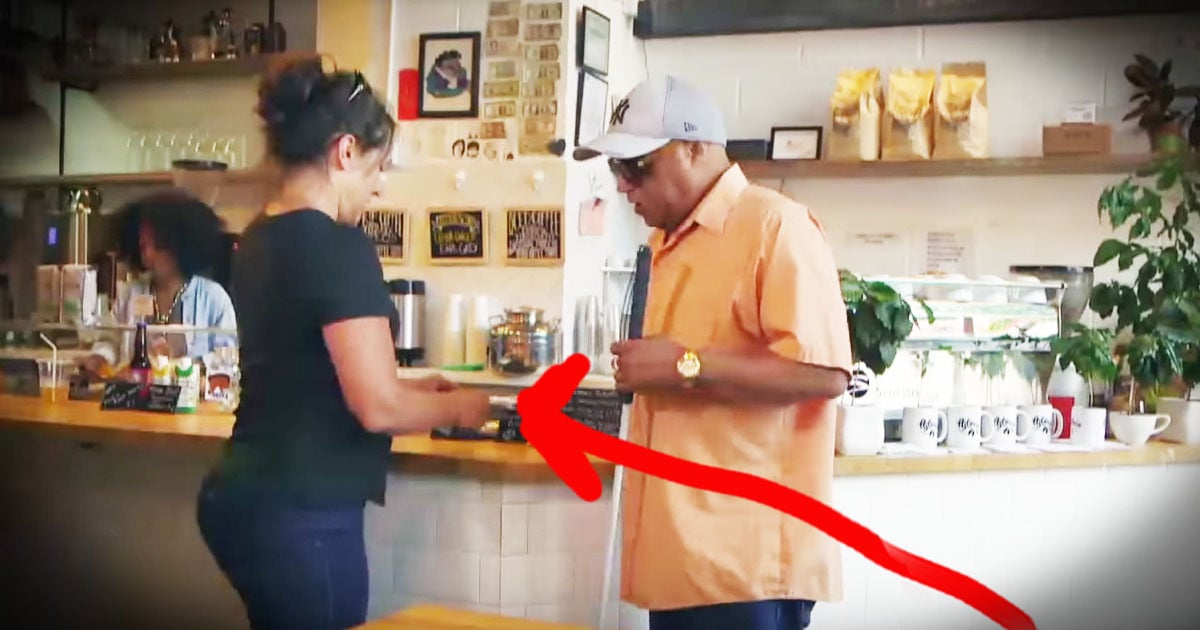 There’s nothing quite like a little baby to remind you of God’s great love for us. Life is truly a gift, and getting to experience that gift firsthand through childbirth is an incredible blessing. It’s a gift we are not meant to take lightly and is not always guaranteed. That’s what makes these photos of 14 preemie babies who defied the odds so powerful!

It’s a tough reality that many are forced to face. Not all pregnancies go smoothly, and it’s a terrifying time for the families. And that’s why we just loved a recent feature Huffington Post Parents did — From The NICU And Beyond.

It’s a feature that’s all about hope. In it, Huffington Post asked their parenting community to submit personal photos and stories of their own little miracles who beat the odds. And for us, it was a powerful tribute to the power of God!

All of the stories were incredible, but here are a few of the ones that hit home the hardest. 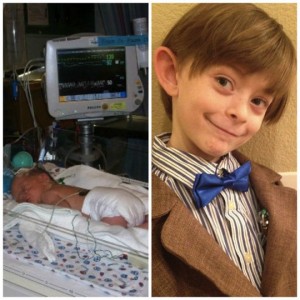 “Drew was born at 35 weeks. His lungs were failing him and he had a stay in the NICU. It was the longest two weeks for my husband and I. While in the NICU, he developed jaundice and had to stay a little longer. The day we brought him home was the best. He’s now a happy, healthy 6-year-old boy who is full of energy and is the apple of his daddy’s eye. I thank God every day for our little preemie!” 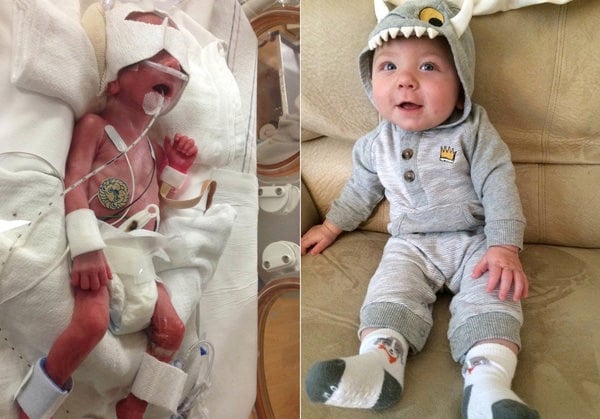 “This is my son, Jesse. He was born when I was 25 weeks and six days pregnant. He weighed two pounds, two ounces and measured 13.5 inches, at one point dropping in weight to one pound, 11 ounces. He spent 66 days in the NICU with a few ups and downs, and a few more when he came home, but he’s doing awesome now! He’s nine months old and weighs in at 15 pounds, 12 ounces, 24.5 inches. He had a rough entrance into the world but now he’s ready to take it on!” 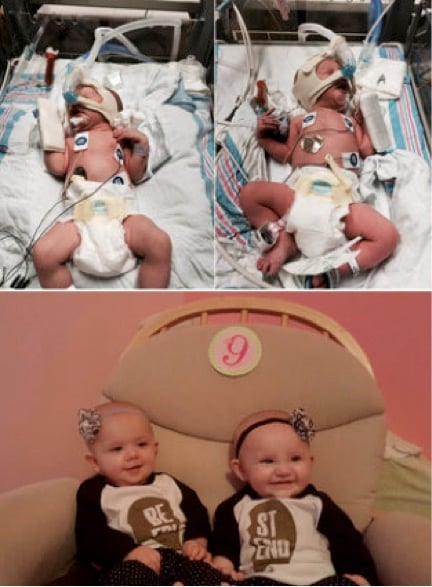 “My twin girls, Stevie and Harper, were born at 34 weeks and spent three weeks in the NICU. They had difficulty breathing, maintaining body temperature and eating. We were so lucky to have the NICU staff to help guide us through the process. We are so blessed that our girls are now 10 months old and thriving. They are almost on target for the average 10 month old.” 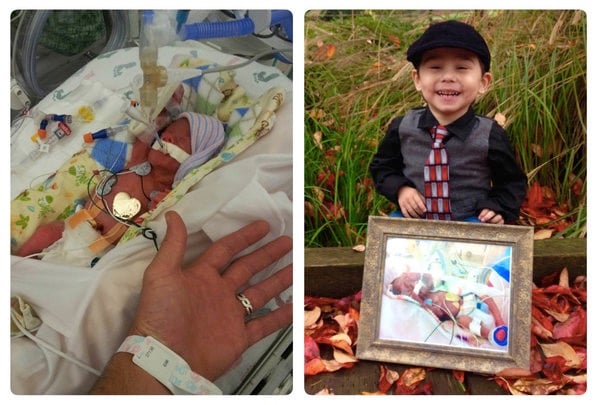 “My son Elijah was born at 30 weeks, one day. My water broke when I was just 24 weeks pregnant and I had to stay on hospital bedrest for six weeks before he came. Due to intrauterine growth restraint (also known as IUGR), he weighed one pound, 12 ounces at birth and was 11 inches long. He spent 91 days in the NICU. It was such an emotional roller coaster but we are so grateful that he is alive and thriving! He is now two years old. Aside from being lactose intolerant, he is doing fantastic! He’s a growing and active toddler!”

“My son Parker was born on July 9, 2006 at 30 weeks. He was two pounds, 13 ounces. He spent 49 days in the NICU. Having a baby that ends up in the NICU is simultaneously the best and worst time of your life. Even after you come home from the NICU, there are challenges. He is such a warrior — he is now 9 and in fourth grade. He has developed into such a strong and amazing young man.He is small for his age, but he tells everyone who comments on his size that he is just ‘fun size.'”

RELATED: This miracle baby was kept alive in a sandwich bag

“My daughter Makenzie was born 11 weeks early and weighed two pounds, 12 ounces. She spent 45 days in the NICU. She is a happy, smart little girl who will turn 4 on December 1! Unfortunately, because she was born too soon she now suffers from cerebral palsy. She is unable to walk by herself but we are diligent with her therapies and making sure she receives every opportunity possible to thrive! My daughter is a joy and inspiration to me every single day. I am so proud to be her mother and share our journey as a preemie family and also a special needs family.” 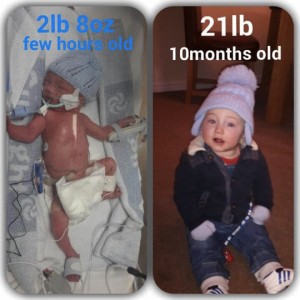 “My little boy Junior was born at 28 weeks; he weighed two pounds, eight ounces. He was in the NICU for two weeks, and he went on CPAP for a week and then came off that. Then a week later he needed to be put on oxygen — he spent two weeks there, then went back to a special care unit and continued on oxygen. Junior had a hole in his heart but it closed up when he was about four months old. He was in hospital from birth — Jan. 22, 2015 — until Mar. 30. Once he came home it was all a distant memory — he is now 10 months old. He crawls, he tries to copy words. And his weight is 21 pounds now — he’s caught up to children who were full term. He has done amazing, and I’m so proud if him. He always will be my miracle.” 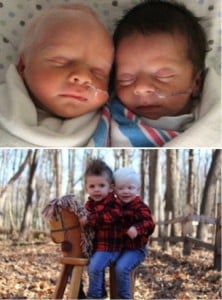 “I have a unique set of twins that were born at exactly 33 weeks. They stayed 24 and 34 days in the NICU. To our surprise, Maxwell (Baby B), was born with albinism while his twin brother Miles was not. They had challenges in the beginning of their lives and came home on apnea monitors. But they are normal happy, healthy and amazing 2-year-olds now.”

RELATED: A premature baby with feet the size of pennies overcomes all obstacles, including meningitis 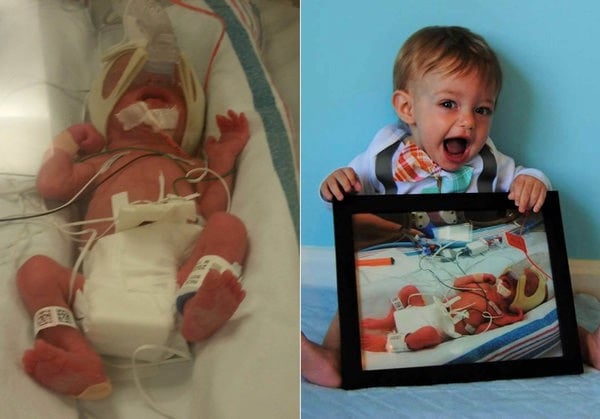 “At 17 weeks pregnant, I was told my baby was going to die. He was very small and wasn’t able to get enough nutrients to grow. I wasn’t going to give up on my baby, so I was very closely monitored. Jonah was born on Nov. 7, 2014 weighing two pounds, three ounces. He stayed in the NICU, an hour away from my house, for 78 days. He is now a year old and 14 pounds. Still small, but he’s growing at his own little pace. He’s been through a lot in his life already. He’s my little miracle fighter.” 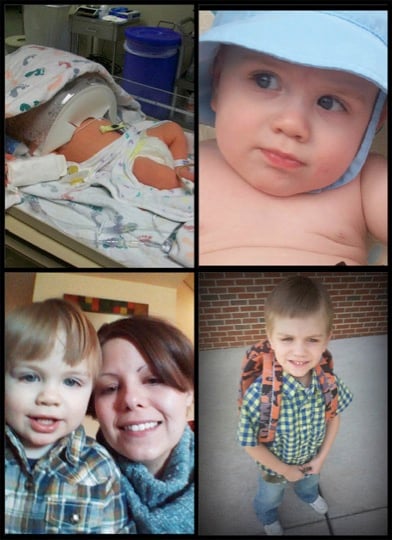 “Jasper was born five weeks early on Aug. 29, 2010. He was in the NICU not for being underweight or underdeveloped, but he had a hole in his lung, that wasn’t discovered until 2 a.m. on the morning that we were to be discharged. It was truly a miracle that it was found before we went home. As terrifying as the whole situation and experience was, we are extremely blessed that things happened the way that they did. He is now a thriving 5-year-old with no limits to the future. Such a loving, old soul that makes my heart smile every single day.”

“This is my daughter, Bay Olivia. She was born eight weeks premature. She faced many of the common problems premature babies face. She suffered with reflux until she was about 1. One other, less common problem she faced was a life-threatening polyp unknowingly growing on her vocal cord for the eight weeks she was in the NICU. She is now 2 and is as healthy as she can be!!! She brings joy to our whole family. She is our very own miracle.” 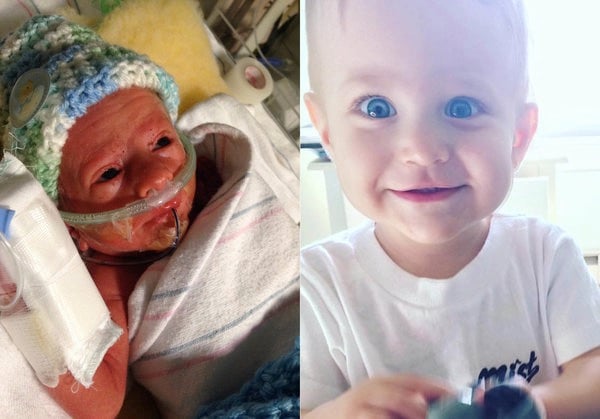 “Elliott was born eight weeks premature at just about 32 weeks after my water broke at 28 weeks. He was born at three pounds, three ounces and was 16 inches long. He spent six weeks in the NICU, and eventually came home on oxygen. He is now almost 15 months old and catching up wonderfully and thriving.”

RELATED: Baby born weighing less than a bunch of grapes defies all the odds

“Our baby boy Bodie was born at 34 weeks and weighed four pounds, 8 ounces. I was diagnosed with a condition called uterine didelphys during some of our first ultrasounds. Bodie is our miracle baby, as there is a huge miscarriage rate with this condition. We knew there were high chances of Bodie being born early as well. Luckily we only spent 18 days in the NICU. We now have a hefty and healthy 6-month-old who is officially off the preemie charts.” 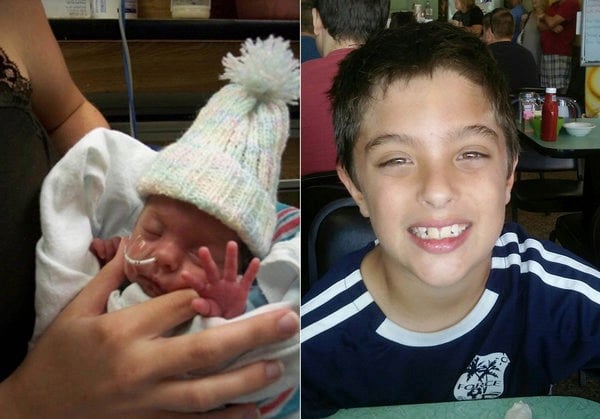 “My Talan was born 9 years ago at 26 weeks and two pounds, five ounces. He spent two months in the NICU and did exceptionally well. He overcame the usual holes in heart, brain bleeding, tube feeding and Apnea spells. After reaching four pounds and coming home, he also had to deal with torticollous and speech delay, but both were cleared up with therapy. Now, he is extremely healthy and intelligent, a star soccer player and in the gifted class at school. We are so blessed and thankful to have such a great story to share. Miracles do happen everyday.”

What an inspiration to see God’s work in these beautiful children. And what a reminder of the value of each and every life. Our Lord truly does perform miracles every day!

YOU MAY ALSO LIKE: This mom put her trust in God and refused to abort her ‘disabled’ son