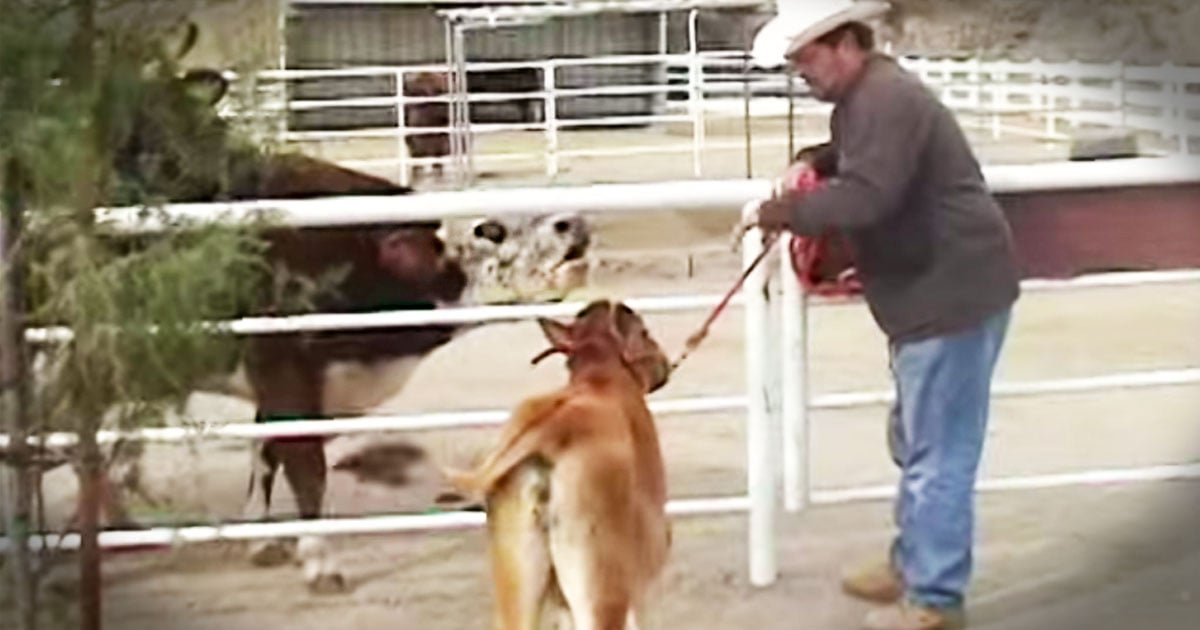 Karma The Cow Gets Reunited With Her Baby
Read Article »

Prayers For This Pup With Half A Face

Some people may be shocked or disturbed by this sweet pup who has only half a face. But Khaleesi's story is one of the triumph of spirit. And when you look at those sweet eyes, you can't help but fall in love!

So, what's wrong with Khaleesi? She's lost her nose and nostrils, and has been left with just a smooth nub, leaving her front canine teeth to jut out. Forced to breathe through her mouth, she is at danger of inhaling bits of food and water into her lungs whenever eating or drinking, which only causes further respiratory problems.

Khaleesi also cannot use her back two legs. She has a fractured spine, along with broken ribs that did not heal properly. And so, she's forced to crawl around using her front legs.

As if that's not enough, Khaleesi is severely malnourished and underweight. Estimated to only be a year old, you may wonder how such a young pup could have already endured so much. And that's the worst part. Though no one knows for sure, it is believed that all of these maladies didn't just happen in some freak accident, but rather were the result of abuse.

"It's amazing she's alive. It's utterly amazing," says Stephanie Paquin who runs Passion 4 Pits, the organization now caring for Khaleesi. We say it's a miracle!

Stephanie came across this sweet girl when she and her husband were on their way back from a long weekend getaway. They stopped at an animal shelter in Orlando to check on another dog. But when they arrived, one of the workers told Stephanie that they had a special case that could use her attention. Stephanie says,

"When they brought her out, I immediately started crying. She came home with us that day."

Despite the abuse she has endured, Khaleesi's sweet spirit has remained intact.

"Other than her outward appearance, she is a very happy dog. She's playful and gets along with other dogs. She has an amazing personality for what she has been through and continues to go through," says Stephanie.

Stephanie and her organization, Passion 4 Pits, have rallied behind Khaleesi. They shared her story on Facebook, which has garnered amazing support, raising over $40,000 to help with the 5 surgeries and extensive rehabilitation Khaleesi will need.

This spirit of this sweet pup has even inspired her vet, Kerri Slomcenski. Kerri reached out to Stephanie after she saw Khaleesi's story on the Passion 4 Pits Facebook page, letting her know that she'd love to help out with the dog's care. The vet says,

"Khalessi struck a chord with me. Her eyes. Her eyes really spoke to me. When Stephanie brought Khalessi to me, she couldn't walk, she crawled. She can stand for second or two, that's about it."

And after meeting Khaleesi, Kerri had even more respect for the pooch. After surveying all of the dog's injuries, the vet said the pain she would have experienced at the time these injuries were caused would have been immeasurable.

And yet, despite all of the trauma and abuse, this pup still loves people!

Thankfully, Kerri had the following to say about the dog's injuries:

"It's all fixable. The body is an amazing thing. It finds a way to heal itself."

The vet and Passion 4 Pits are working together to get Khaleesi all of the medical attention needed to get her back on track. The goal is to rebuild the dog's nasal cavity so that she will be able to breathe properly again. The vet also plans to mend the damaged bones in her spine and ribs so that Khaleesi will again be able to use all four legs.The surgeries and rehabilitation will take some time, but once they are complete and the pup has fully healed, the goal is to put Khaleesi up for adoption so that she can find a family to love her and her gentle spirit. And with all of the attention she's been getting, we have no doubt there will be a line of people hoping to be that family. Let's keep sending up prayers for this sweet dog's recovery!