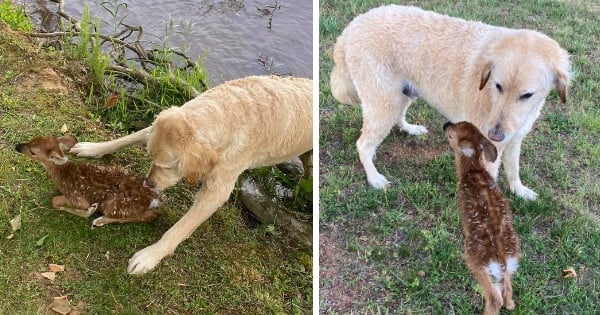 There is one less dog on the streets thanks to a pit bull puppy adoption. But this just wasn't any adoption! It's a miracle story that will warm your heart and make you want to praise Jesus. A pit bull puppy was near death and now the man who helped save her is the one giving her a home.

The puppy named Smoke was running for her life when she ran into oncoming traffic. Former police officer Brad Chambers saw her run under his truck. Concern flooded him when he saw her terrified face as she trembled in fear. Brad saw that she was bleeding profusely.

RELATED: They Said No One Would Want This ‘Broken' Pup But God Revealed The Deaf Dog's True Worth

Bewildered, he pulled her into his truck and began treating her injuries with an "active shooter trauma kit" he always carries in his vehicles as a result of his time as a police officer. To his gruesome discovery, this innocent pit bull puppy had been stabbed seven times. One of the injuries included a stab wound in her trachea.

Brad said, “The stab wound penetrated so deep into her neck that it damaged her trachea. It was air escaping her trachea into her lung and chest cavity around her heart.”

With her little life hanging in the balance, Brad did the best he could to treat her injuries as he raced across town to an animal hospital. Smoke underwent several surgeries to save her life, racking up over $15,000 in medical bills.

RELATED: No One Seemed To Want This ‘Ugly' Pit Bull But All Of That Changed Once He Went Viral

Because Brad had already bonded with her, he decided her forever home would be by his side. So, he set up a fundraising page to cover the cost of the bills.

And Smoke is grateful to her new dad who is now training her to be a therapy dog.

“This is a dog who needs to find a place that everyone around her is going to benefit from her lovingness, and yeah, I love dogs," Brad commented.

Don't you think after surviving her trauma and healing from her past that she would connect with others who are in need of healing too? God knew exactly what he was doing when he put Brad in the right place at the right time to rescue Smoke!

YOU MAY ALSO LIKE: Melvin The Pit Bull Waited 667 Days For Adoption But He's Headed To A Loving Home At Last

WATCH: Pit Bull Puppy Was Near Death And Now The Man Who Helped Save Her Gives Her A Home

LISTEN: Vigilant Grandma Spots Vehicle From Amber Alert In Minnesota And Saves A 1-Year-Old Boy; Man Spots Something Odd About Ceiling And Stumbles Into Secret Attic Room Full Of Treasures