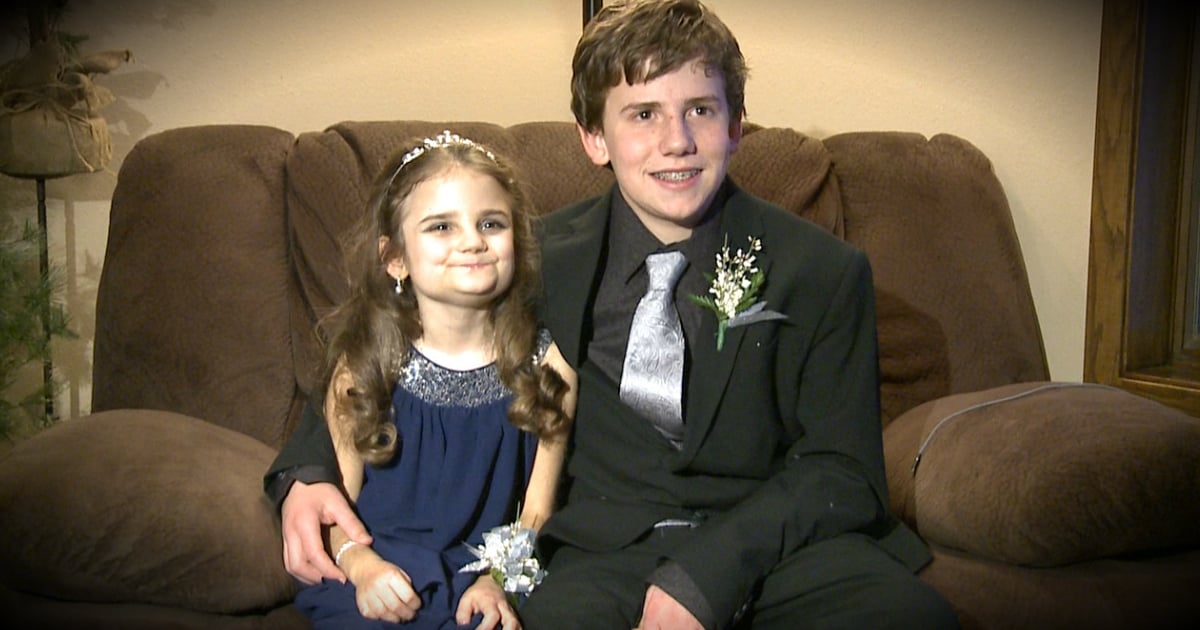 The True Story Of Beauty And The Beast

This is the story of the real life “Beauty and The Beast.” “The Beast” is six foot tall, 330 pound powerlifter and motivational speaker, David Douglas. And “Beauty” is 12-year-old Lindsay, who suffers from progeria, a rare genetic disorder that ages humans 8-10 times faster than normal. The close-knit pair may be considered a bit unlikely, but they’re also one of the sweetest duos we’ve ever seen! 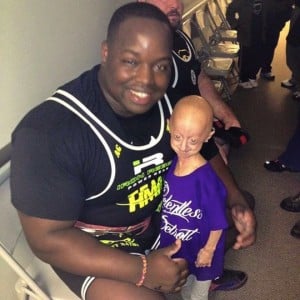 As a former marine, David aka “The Beast” may be able to bench 600 pounds, squat over 900 and deadlift 770, but he’ll be the first to tell you that he can’t come close to matching the strength shown by little Lindsay. 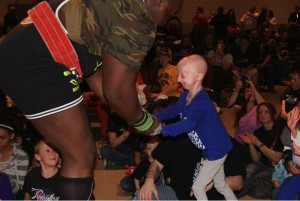 Because her disease ages her so quickly, the average lifespan of a person with progeria is 13 years old. Lindsay is 12. But David says,

“You would never know that she was fighting something so hard because she is always smiling or giving some type of sarcastic answer to make you laugh.”

RELATED: 2 Little Girls With Rapid Aging Disease Get A Miracle

Though many view tiny, delicate Lindsay and her huge, hulking buddy, “The Beast,” to be an odd pair, God brought these two together in a beautiful way. 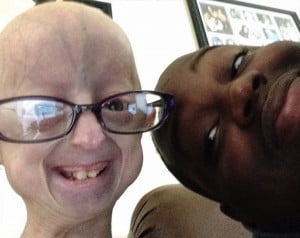 They first met at Relentless, an annual powerlifting event sponsored by HopeKids to help raise money for the families of children with rare diseases. Their mission is to build relationships, change lives and to serve God by uniting strong men and women with even stronger children.

David, a resident of California, was feeling down on his luck when a friend suggested he participate as one of the weight lifters in the charity event held in Detroit. After explaining that the day was really all about making these special kids feel like superstars, David couldn’t say yes fast enough. It blessed him with just the type of purpose he was struggling to find in his life. 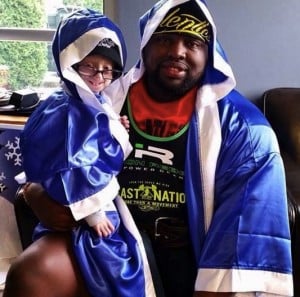 Shortly before the big day, David’s friend contacted him again, letting him know that one of the sponsored families and their little girl wanted to meet him. The news left David grinning from ear to ear, and once he met Lindsay and her parents, he was forever changed.

“Lindsay became my lil sis since day one,” David explains. “I knew she meant something to me, but after everything that has happened, there is [sic] no words to describe how I feel about her. She has pulled me out of rough spots just by thinking of her. That is a priceless gift. That is why I made it my duty to help her out in any way that I can.” 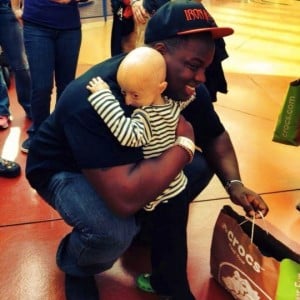 The two have been incredible friends ever since, despite the geographic distance that separates them.

RELATED: A 17-year-old with rare aging disease will inspire you

David flew out to Detroit to surprise Lindsay at the 2014 Miles for Miracles Walk, a fundraising event for the Progeria Research Foundation which the little girl and her family worked hard to support. David tricked Lindsay and her family into believing he was unable to make the event. And when he arrived, the sweet girl’s reaction was absolutely heart melting. . .not just for us, but for David as well!

“I will forever remember that moment and that feeling seeing her run to me and smile,” he said.

You can watch the incredible surprise in the video below:

Lindsay soon returned the touching gesture with a surprise of her own! When David was heading into surgery for his bicep in 2014, Lindsay surprised him by showing up at the hospital with a shark pillow she’d picked out for him.

“That had me broken down," David said. "To be going through what she is going through and still make that big of an effort to lift someone else's spirits blew me away. I will never forget that moment."

Where do I even begin? I let people know that I was getting surgery on Tuesday just days ago. I was waiting to be taken…

And though Lindsay and David have been pals for several years, their beautiful friendship just recently got the national attention it deserves after a photo of the precious pair went viral. The picture was taken a few years back after the Relentless fund raising event in Minnesota. David explains,

“I got a picture from a friend that took a picture of us and i felt very strongly about it so i wanted to get the point across on how i felt about it and her. People looked at me as strong when everything about her was stronger. Instead of putting those words off to the side, i decided to put it right on me to make the point even louder. You have to look at the big picture of it.”

I love this picture so much.

The photo was picked up by a local news station, and has been shared over 100,000 times, with even more likes. Lindsay’s strength, endurance and positivity as she battles this terrible disease brings to mind a quote from Shakespeare,

“Though she be but little, she is fierce.”

What the world sees as an unlikely pair, God sees as a beautiful friendship to which He gave a special purpose. It’s brought awareness to progeria, as well as to the brave, little warriors like Lindsay who are fighting it and the organizations out there dedicated to supporting the search for a cure.

You can see David and Lindsay together in the video below:

This real life story of Beauty and The Beast serves as a reminder of the blessings and beauty that await when we look not with our eyes, but with the spirit of love God has given to each of us!

“Do not consider his appearance or his height, for I have rejected him. The LORD does not look at the things people look at. People look at the outward appearance, but the LORD looks at the heart." 1 Samuel 16:7

See just how this unlikely pair of friends help to comfort each other after their traumatic pasts! 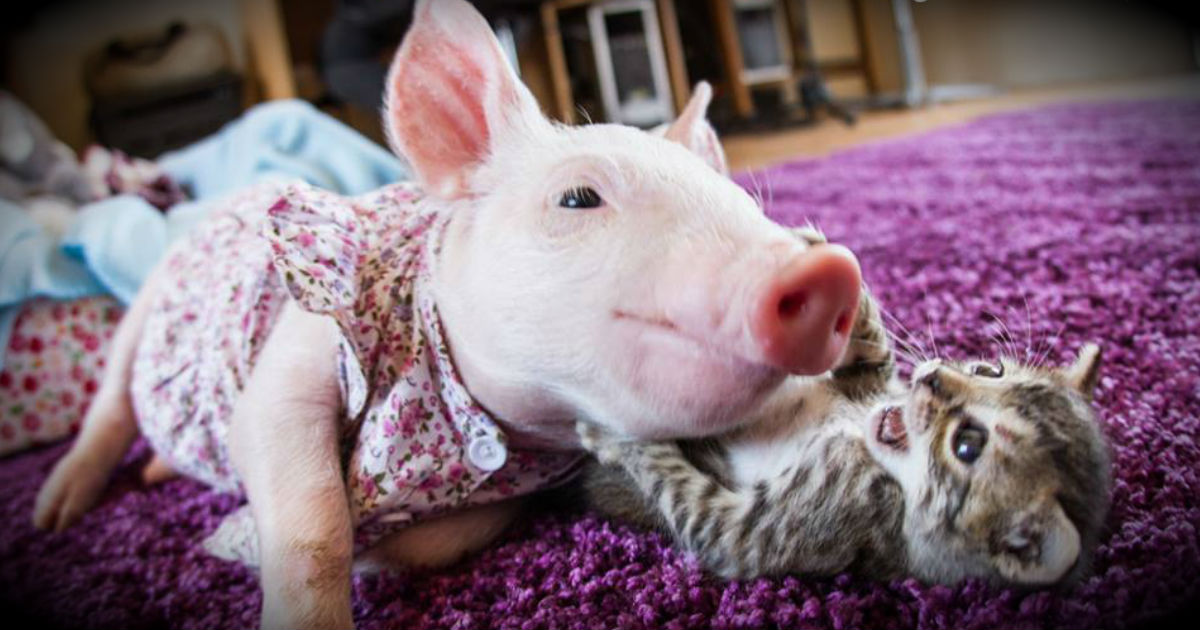