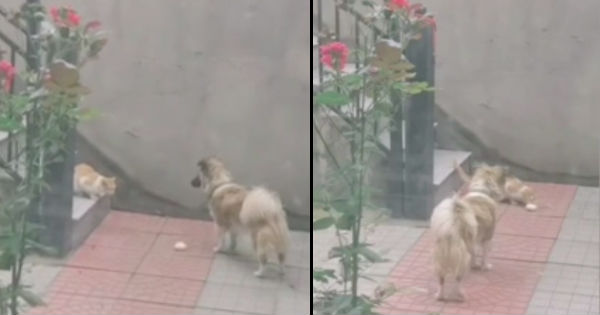 Animal abuse is a cruel, terrible, and unthinkable act. Who could think to harm such sweet, innocent babies? Sadly, this can be a common occurrence, which is why animal rescue staff are such heroes! Thank goodness rescuers found a dog covered in tar and saved her life!

Champi the dog wasn't even recognizable when animal rescue found her on the side of the road in Solapur, India. She was basically stuck to the ground because she was covered in so much tar and dirt.

RELATED: Dog With A Heart Of Gold Can Be Seen Bringing Food To Feed A Stray Cat

It took four days to clean Champi properly. They had to remove the tar carefully, so they used vegetable and coconut oil to try to cause as little pain as possible. Champi's transformation depicted in the video footage was an incredible achievement!

She went from being a small, scared dog covered in tar, to now being a happy go lucky dog. You can now see her brown and white fur, because her skin is healed!

Rescuers Find Dog Covered In Tar And Save Her

“Champi must have been so uncomfortable, but she was brave through it all,” said Animal Rahat (which means "relief") in the video. The pup's incredible spirit and attitude to never give up left the rescue team impressed.

She now lives with one of her rescuers where she is loved and cared for. “Despite the ordeal, her sweet and playful personality began to shine through, and when she was finally tar-free, one of her rescuers made her part of his family,” Animal Rahat reported in the video description.

YOU MAY ALSO LIKE: Heroic Police Dog Tracks Down Missing Mom And Baby And It Was Only His First Shift

“Now, her fur has grown back and she spends her days running in the fields at her new home and playing with her animal friends, including some rescued chickens,” they continued. "Nothing can hold her back from living her best life."

Champi was a scared and neglected pup. But with the help of sweet, kind-hearted people, she is now safe and in a loving home. Where she will live a happy life!