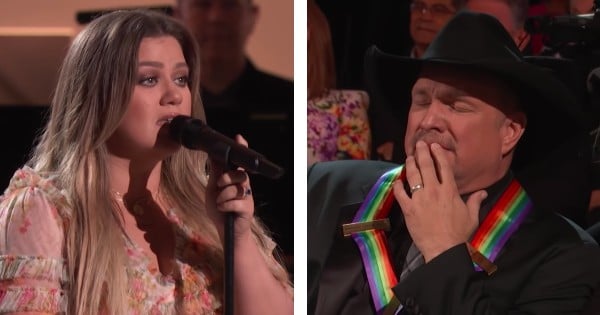 This Ruben Liversage ‘Sound of Silence’ performance turned your average school concert into something incredible. I think it’s safe to say this 16-year-old has a bright future!

Ruben Liversage is a 16-year-old with the pipes of the next Scotty McCreery!

RELATED: Singing Sensation Celtic Thunder Puts Their Spin On ‘The Sound Of Silence' And It's Amazing

At the beginning of the video you see a boy dressed in all white with smoke and lights. That’s 16-year-old Ruben Liversage. Out of his mouth comes a strong, deep, bass voice.

From the side a boy and girl dance beautifully to his dark melody. Then the lights come up and reveal the boy in a white military uniform with a full choir behind him. The show choir dances and sings in a real complementary way to Ruben. The entire performance is stunning and flows so naturally.

There is a real melancholy intrigue within his performance. Originally produced in 1964, Simon and Garfunkel wrote the song, "Sound of Silence.”

RELATED: Guitar Performance Of ‘The Sound Of Silence' In The Middle Of A Blizzard

According to SMF "‘The Sound of Silence is symbolic of people's inabilities to effectively communicate with each other on an emotional level."

“And the vision that was planted in my brain
Still remains, the sound of silence”

We all experience emotional hardships at times just like the expression of this song. However, we can pour our hearts out to our God who loves us just like Joseph, David, even Jesus, and many who have gone before us.

Christians know that we will have hard times in this world. However, we can have the hope of Christ in our lives and victory through His resurrection. It is also such a gift to be able to express and share our feelings with others to learn that we are not alone. No matter what darkness you are going through, you are seen and loved by the Lord. You are more than this battle. He has overcome and given you that victory too.

YOU MAY ALSO LIKE: Willie Nelson's Son Lukas Is Singing A Hauntingly Beautiful Version Of ‘The Sound Of Silence'

“I have told you these things, so that in me you may have peace. In this world you will have trouble. But take heart! I have overcome the world.” John 16:33