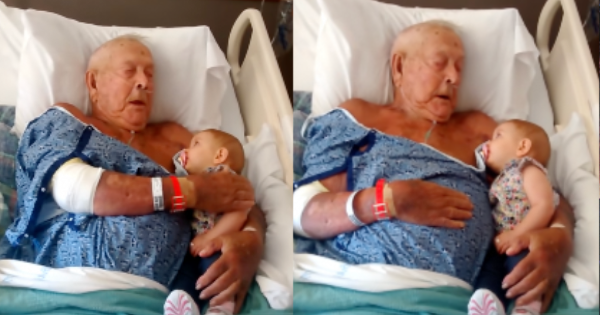 Sadie Robertson’s daughter raises her hands in worship during church service and it makes for one joy-filled mama!

24-year-old Sadie Robertson Huff is all grown up now, but many remember her as a teen on episodes of A&E's Duck Dynasty, which aired from 2012 to 2017. Nowadays, Sadie is an author, actress, and television celebrity. In addition, she hosts the "WHOA, That’s Good Podcast."

She's a busy lady, indeed. But, in all of Sadie's endeavors, she demonstrates a genuine faith and belief in Jesus Christ.

Here we see her at church service as she holds her sweet baby girl on her hip. The congregation is singing Brandon Lake's song, "House of Miracles," which petitions God's people to "come alive, in the name of Jesus." Voices in praise fill the auditorium and many raise their hands in worship.

Sadie isn't fixed up fancy, but she wears a lovely green sweater and the most beautiful smile. Sadie Robertson’s daughter, little Honey, is dressed in an ivory outfit, and she has her binky handy, hanging from a beaded binky lanyard. The girls are adorable! But, the sweetest thing of all is how Miss Honey observes church family and friends around her and follows their lead, raising her precious paw up as well!

Honey wiggles her fingers a bit and seems to mouth along with the song. Her eyes are big and bright. She's taking it all in, but she's also joining in! It is a perfect mom moment for Sadie! Sadie taps the woman next to her so she can catch this little blessing, too.

Sadie Robertson writes in her post how delighted she is to catch her daughter copying the act that she sees modeled around her. Children repeat so many actions and words demonstrated by the adults in their lives. It's wonderful when our little ones see daily kind, positive, and Christlike examples-the kind of examples that cause them to come alive in their faith, too!

YOU MAY ALSO LIKE: Sadie Robertson Was Body-Shamed After Having Her Baby But She's Not Having It