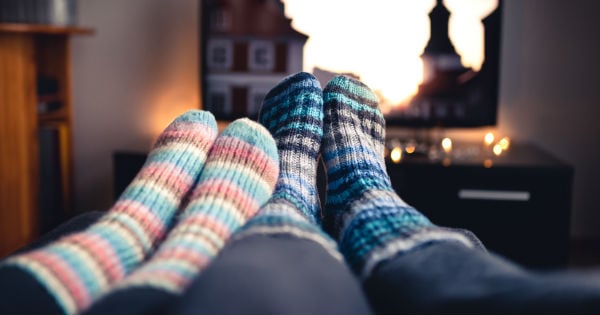 True Story Behind The Viral Poem, And the People Stayed Home
Read Article »

In this heartwarming story, a woman marries the man who saved her life during the tragic shooting in Las Vegas back in 2017.

Chantal Malanson was at the Route 91 Harvest Festival in Las Vegas with some of her friends at the end of September 2017. During the second day of the festival, while she was out at a country bar, Austin Monfort walked up to her and introduced himself. The two got to talking and started dancing together. And before long, they both realized that there was a spark between them.

RELATED: Dog Helps His Beloved Human With Proposal Until The Pup Gets Hilariously Distracted

"It just felt like we knew each other forever," Chantal said. "We went to grab a bite after the bar and exchanged numbers."

Little did Chantal know that just 24 hours after meeting Austin, they would experience one of the worst mass shooting in America together and he would help save her life.

The day after the pair met at the bar, Chantal's friends wanted to go shopping, but she decided to reach out to Austin. He was already at the festival, so she went to join him there to enjoy some music and dancing. That was the night when a shooter opened fire from his hotel window high above the music festival's crowd. The gunshots were aimed at the area where Chantal and Austin, along with 22,000 other attendees, were watching Jason Aldean perform on stage.

"We thought it was fireworks at the beginning since all big concerts usually have some kind of fireworks. However, when it wasn't stopping, everyone dropped to the ground," Chantal shared. "We were on the ground across from each other so we both were looking at each other. We stayed on the ground for a while and the shots were not stopping. Austin's friends' parents told everyone to run to safety because the shots were nonstop. Everyone ran in different directions, but Austin stayed with me and we ran together. We ran across the entire festival grounds stopping a few times to get shelter."

While the two were running to safety, Austin held on tightly to Chantal the whole time and guided her to safety out of the gunfire. Then they jumped into a taxi and headed to the hospital since others in the taxi had been badly injured.

"We stayed in the hospital overnight due to lockdown and Austin never left my side," said Chantal. "He held me throughout the night and kept me safe. After what we had just gone through, he was my safe place."

Woman Falls In Love With Man Who Saved Her Life

The next day, Austin flew home to California. Chantal flew back to her home in Canada the day after. The pair continued to FaceTime every day and eventually fell in love.

"He was the only person I wanted to talk to. It just felt so right and safe talking to him after what we went through," Chantal said. "He told me he would come visit me in Canada. Six weeks later he made his promise! And we never spent more than six weeks apart either me going to California or him Canada."

With them living in separate countries, their long-distance relationship faced challenges. But the two knew that their love was worth it.

"We had very important life conversations earlier on since we were from two different countries. We had to figure out what life would be like if we stayed together and made this work," Chantal explained.

And the couple did make it work because Austin proposed to Chantal in March 2019 in Laguna Beach!

"He brought me to our favorite beach and there was no one around. It was perfect," Chantal shared. "His heart was beating out of his chest when he gave me a hug and he got down on one knee and proposed, followed by a beautiful three-course meal."

Postponed Wedding Plans For Bride And Groom Due To Coronavirus

In September 2019, Chantal was given a visa and moved to the U.S. to be with her fiancé. Then, the pair had a courthouse wedding in November 2019 since they had to be legally married within 90 days of her entering the country.

Austin and Chantal had been planning to have a big celebration with their family and friends to celebrate their marriage at the beginning of May this year. And they were looking at having it at the place where they first met, Las Vegas. Yet, due to the coronavirus, their wedding reception has been postponed.

YOU MAY ALSO LIKE: Hospital Nurse Breaks Down While Getting Brutally Honest About What She's Seen On The Frontlines

"It's been a bit stressful as so much planning has gone into it with my whole family living in Canada and his California," Chantal explained. "However, through it all, we are just so grateful that we both get to be quarantined together and not in different countries!"

What an incredible story this couple has, and hopefully, when the time comes, they will be able to celebrate their love with all of their friends and family surrounding them.