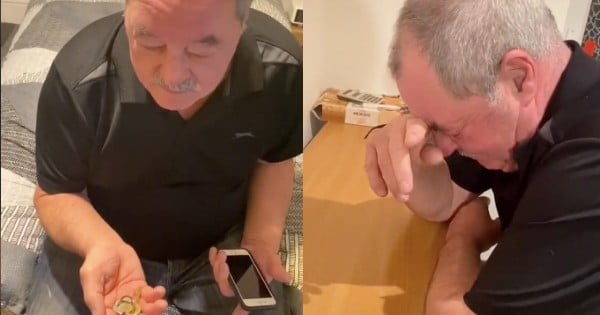 These high school sweethearts spent nearly 70 years apart, but they were finally reunited and married at last!

Doesn't love have a funny way of coming back around, reuniting friends, family, even lovers?

The man and woman starring in this story are Fred Paul and Florence Harvey, two school sweethearts who met about 68 years ago. During that time, the two were teens who encountered one another in the small town of Wandsworth, located in Canada.

RELATED: Husband Leaves A Heart-Wrenching Goodbye Letter To His Wife And Then He's Gone

They did the things teenagers do: spend time together, walk together after church, venture to concerts together, and sneak kisses here and there.

At night, Fred had this unique gesture of flickering his porch light. This was his way of communicating to Florence across the bay that he was saying, "Goodnight," and "I love you."

“She was my first love. My first girlfriend and my first true love,” Paul said.

They dated for two years. Their time together came to an end when Fred turned 18 and Florence was 15. He moved away for work in Toronto. Fred eventually did come back to his hometown a year later.

He searched for Florence, but learned she moved to another town.

From there, time passed. A lot of time.

Both Fred and Florence married different people and lived out their own lives. When the year 2017 came around, Florence found herself single again. Her husband of 57 years passed away from brain cancer. They shared 5 children.

With so much unshared history, one would naturally wonder what brought them back together. The answer to that question is their shared grief.

Florence made the first call to Fred. She caught news of his wife passing and wanted to call and encourage him that his life would improve.

“I never thought it would go past that,” 81-year-old Florence admitted. “But we went from talking once a week, to twice, to three times, to every day for hours. We had really reconnected even though we hadn’t seen each other in all those years. I knew this was it.”

Months later, she visited Toronto during Fred's July birthday and surprised him.

“When I found out she was in town and was coming to me, it was 10:30 at night. I ran out of bed and got dressed and wrote ‘Welcome Florence’ in chalk on the driveway and when she arrived, I walked to the car, gave her a hug and a kiss on the cheek, and I held her hand and I knew right away that she had taken my heart,” Fred said.

Three days following their reunion, they were prepared for marriage. Unsurprisingly, their families questioned the decision. Still, these two were committed to making that decision. And in spite of Fred's current battle with stomach cancer, Florence was committed to stand by his side.

They married at the Norval United Church in Georgetown, Ontario on August 8, 2020.

The church's minister Paul Ivany was moved by the couple's history.

“They both had been married for years and had created families and memories and wonderful lives. They both had truly fulfilled their vows to their first spouse ‘In sickness and in health. In joy and in sorrow. To love and to cherish. As long as we both shall live’,”

From this point, Fred and Florence plan on revisiting Wandsworth, the location where they initially fell for one another. And from there, they can move on to create their own new history.