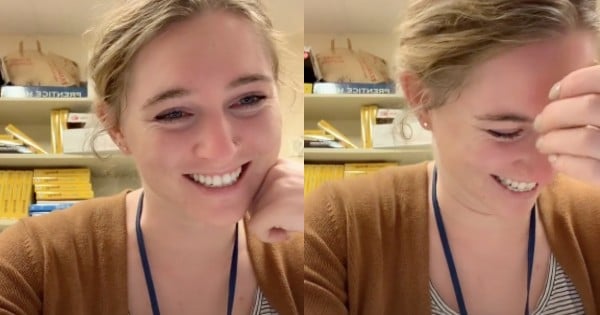 Golden retriever puppy Marshall is one smart dog in the world. In this funny animal story, the clever pup knew just what to do after getting locked out of the house. Just ring the doorbell, of course!

In Spokane, Washington, 3-month-old Golden retriever Marshall found himself in a bit of a predicament.

Somehow, the curious pup managed to escape the house late at night without his humans realizing it. The problem, though, was now he was locked out.

Escaped Puppy Marshall Must Find A Way Back In

Getting out was easy. Now, getting back inside the house would be the tricky part.

The pooch could have just spent the night on the front porch. But as one of the smart dogs in the world, Marshall had a better idea. He’d just do what he saw the humans doing!

Though no one had ever trained Marshall to knock on the door or use the doorbell, the clever pooch stood up on his back legs and used his fluffy paw to ring the doorbell. And the family’s security cameras managed to catch the adorable moment on film!

Marshall’s owner, Greg Basel, has a Nest security system monitoring his front porch. So, anytime someone rings the doorbell, an alert goes to Greg’s phone. And amusingly, that alert is set to sound just like a knock on the door.

So, every time Marshall rings the doorbell in the video, you can hear a “knock-knock” sound. And, when paired with the smart dog’s expectant face as he waited for someone to answer the door, the security footage turned into a viral video in no time!

We’re just glad Marshal is safe and sound and back indoors with the humans he loves!