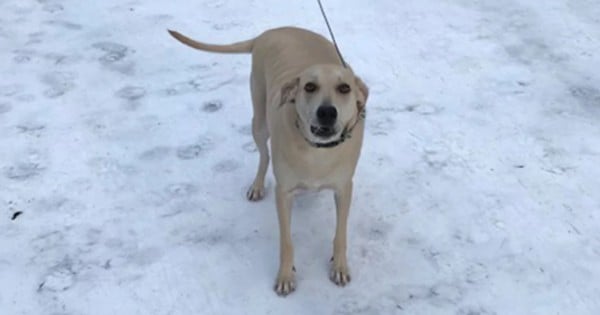 A man spots a young girl and three dogs in danger and smashes through the ice to save their lives!

Despite the injuries he sustained for his actions, Chris Flemming saw someone in need and did not neglect to help.

RELATED: Runner Spots A Dog Stuck In A Frozen Lake At A Park And Immediately Jumps In To Help

In Dundee, a city in Scotland, at the Crombie County Park, Chris was out walking his dog Arthur. The gym owner and his pet were going about their own business when he spotted a teenager with three of her own dogs struggling in the water.

The 40-year-old man raced into action. He traversed over the frozen surface of the water. Then for some time, he smashed through the ice and finally rescued the girl and her dogs.

He sustained ice burns and scratches for his efforts, but that simply makes him more of a hero. Battle scars are what we call the wounds of a hero.

The unfortunate situation first unfolded with the teenager playing catch with her pets. Chris saw this in action while he walked with Arthur.

“I saw the other two girls with their two golden retrievers and saw this dog go over to them with a ball in his mouth."

“The dog then dropped his ball, which rolled down the embankment and the dog went down after it and went through the ice, then the other two dogs followed that dog and fell in."

“The girl who had the two golden retrievers ran down and tried to save them, and she’s only about 19, and fell in."

“It was so icy, so I couldn’t run over and had to sort of scoot over. I was telling her to stand up because I thought it couldn’t be that deep but she couldn’t."

Chris gave Arthur over to the woman's sister who was standing there in a panicked state.

He struggled to get the girl and her dogs free from the water. The weight of the dogs was more than he could manage without a lot of effort.

“I was trying to hold up these two golden retrievers that were kicking my legs and I had my elbow underneath this girl’s chin while she’s holding her dog up."

“I realized it wasn’t working and the dogs were dragging me down. They were like cement. Then I saw another guy come over to help and I suddenly thought ‘I need to try and smash the ice.'”

They each did their part to smash the ice.

Everyone walked away from the accident safe and sound. And we're so grateful God put Chris in the right place at the right time to save the day!

YOU MAY ALSO LIKE: It Looked Bad For An Elderly Man Who Slipped On Ice But God Sent A Furry Angel To Help

"But when you do alms, let not your left hand know what your right hand does:" (Matthew 6:3)

WATCH: Man Spots Young Girl And 3 Dogs In Danger And Smashes Through The Ice To Save Them