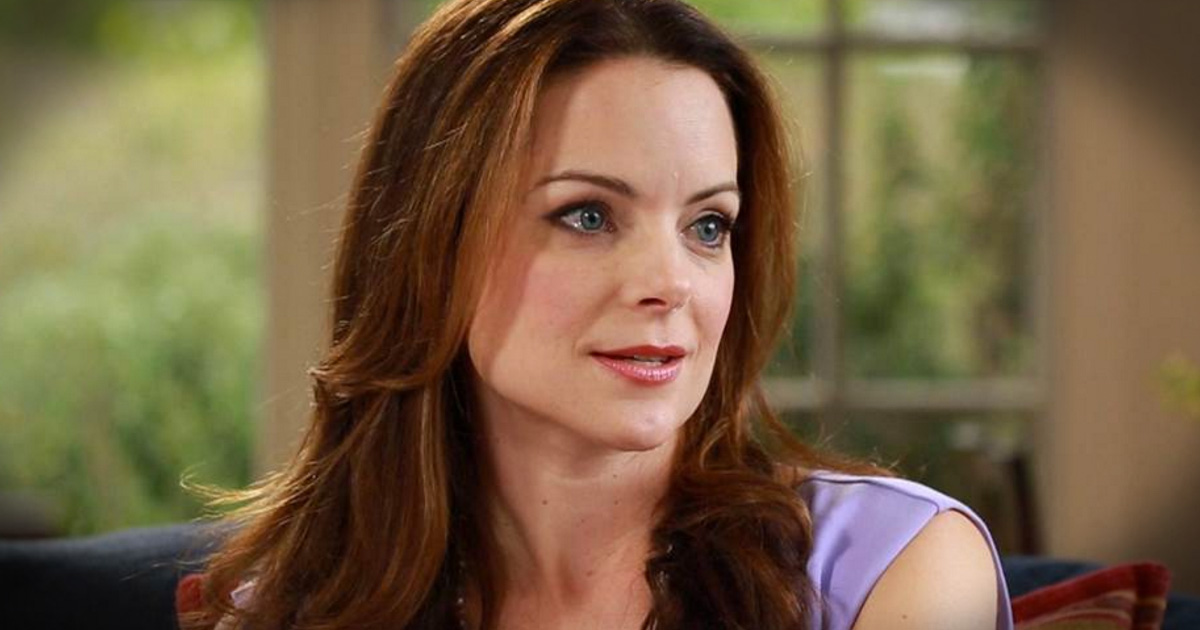 For those who think there’s not much to a smile, try explaining that to 3-year-old Brooklyn. This sweet girl eagerly awaits Thursday mornings when she gets to wave to her “favorite awesome smiley garbage man.” 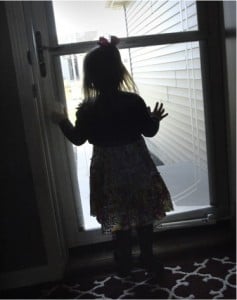 Until recently, the two had only ever smiled and waved to each other from afar. But that simple act quickly became a cherished part of the little girl’s week. And so, on one special day, Brooklyn waited outside with a special surprise for her hero.

Brooklyn’s mom, Traci, shared the story with the City of Bloomington, who in turn posted it to their Facebook page.

Here’s the story as it was shared on the City of Bloomington Facebook page:

“HOLY COW… BEST MORNING EVER for Brooklyn (and me). What a start to her birthday.

Thursdays are by far her favorite day… garbage day. For about a year now, she has anxiously awaited the garbage truck’s arrival at our house. 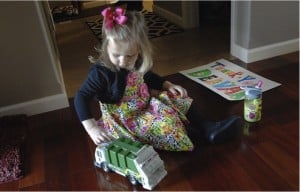 It started with waving from the window, then we had to try and be outside to wave, and when we missed the truck driving by the house, I’d drive around the neighborhood to find the garbage truck and wave… on our way out the door in the mornings. Every… Thursday, my heart is full when I see the joy that our amazing garbage man brings Brooklyn when he honks and waves at her with a BIG smile.

And today, we finally got to meet him!!! Brooklyn and I wrapped up one of her birthday cupcakes and waited for him. 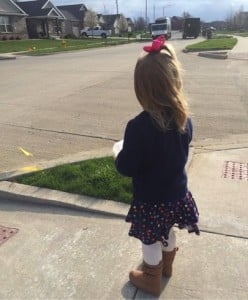 When he came down our street, she ran to the corner. We were waving like usual and I motioned for him to come over by us. He pulled over, got out and gave us his BIG smile. 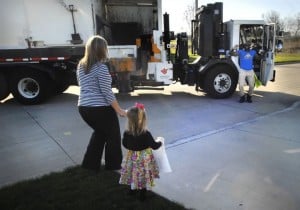 Brooklyn was instantly speechless as she handed him the cupcake. I explained to him that he makes our day every Thursday, and we really appreciate the honking and waving, and how special of a day it is for us. 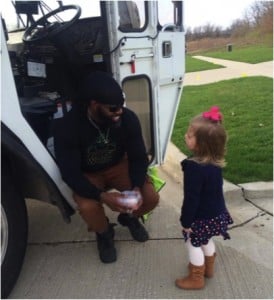 Then… (melt my heart)… he explained that he looks forward to seeing us every Thursday as well. He said that he has a meeting every Thursday morning and always tries to get out of there in a hurry so that he can make sure to see us every week. He said he doesn’t have any kids of his own, but he mentors several children and just loves them. I can’t believe that I never got his name, so for now he will continue to be “our favorite awesome smiley garbage man”.

RELATED: A grandma waves to the school bus from the window every day

After he left, we continued onto daycare. Brooklyn was unusually quiet in the backseat. I asked her if she was okay, and she said “Mommy, I’m so happy.” 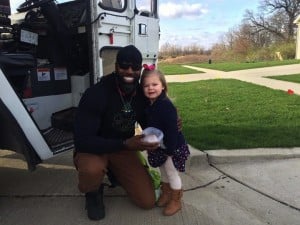 So… to “our favorite awesome smiley garbage man”…

THANK YOU!!! Thank you for the joy that you bring Brooklyn every Thursday morning, for making her birthday special, and for making my heart happy. It may be a little thing that you do, but it means so much to us!”

The heartwarming story of Brooklyn and her “smiley garbage man” — who turns out to be 34-year-old Delvar Dopson — struck a chord far and wide. Messages of support poured in on the Facebook post, and Delvar says he’s received emails from sanitation workers from across the nation, Japan and Canada!

But it’s the unexpected attention from his unlikely best friend that hit home the hardest.

“I didn’t know I was her idol,” he said. “I just looked forward to seeing this young lady every Thursday. She topped it off last week with a cupcake,” Devlar said.

Now that the family had been able to put a name to the “smiley garbage man,” Brooklyn had another surprise. The following Thursday she waited out front with a thank-you sign for her hero, which he later put up in the window of his garbage truck. 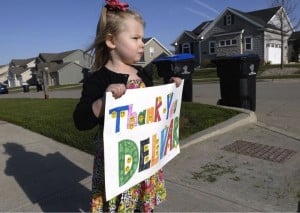 But Devlar had his own surprise for little Brooklyn — some belated birthday goodies. He’d learned that she loved the Disney movie Frozen, and he and his wife had put together a Frozen basket and Frozen art set for the little sweetie! 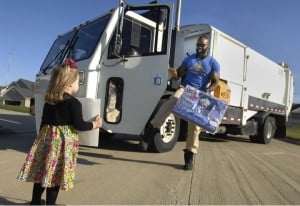 But the real gift is the special bond that blossomed from a sincere smile and friendly wave.

God has a special purpose for each and every one of us. And it sure sounds like Devlar has found his!

“It doesn’t matter if I’m a garbage man or if I’m a CFO at State Farm. We all have to discover our gift and be effective,” he said. “I mentor children and that is the passion in my heart. This is my job, but my (life’s) work is … to inspire the young. I believe everybody on earth has a gift. Once they discover that gift, that’s when they can make a true difference.” 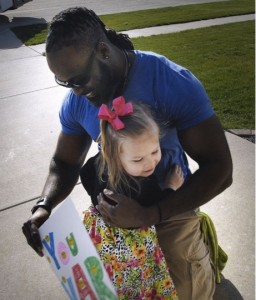 Thank you Devlon for the difference you are making. What a great reminder that a job and a calling are two different things. How has God called you to spread joy?

“For it is God who is at work in you, both to will and to work for His good pleasure. Do all things without grumbling or disputing.” Philippians 2:13-14

See how this garbage man is sharing the love of Christ! 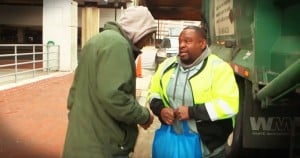