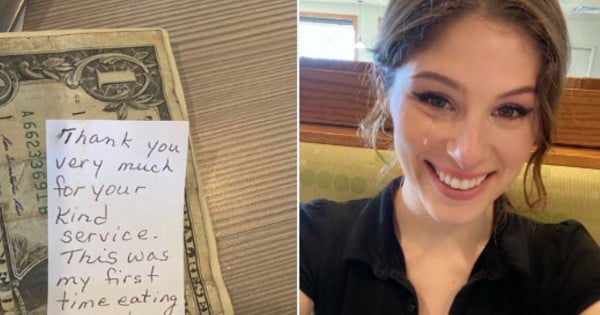 Freshman Michael Todd had a pretty rough first couple of weeks at his new school thanks to bullying about clothes. His family doesn’t have much money so the young man wears pretty much the same thing every day. Thankfully, two high school football players picked up on what was going on and decided to do something so amazing, it’s inspiring folks all over the internet! (If you’d prefer to listen to the audio version of this story, scroll to the end of this article to find the podcast version below!)

Starting high school can be scary enough, without bullying about clothes to make it worse. Sadly, though, for Michael Todd, the torment is nothing new.

RELATED: 2nd Grader Sees Boy With Autism Crying On 1st Day Of School And His Compassion Is Going Viral

"I've been bullied my entire life," the teen explained. "I really don't have clothes at home. My mom can't buy clothes for me because I'm growing too fast."

Kids can be so cruel and the bullying over Michael’s clothes went on for weeks at MLK College Preparatory School in Tennessee.

The student bullying broke the hearts of two of the school’s football players, Kristopher Graham and Antwan Garrett.

"When I saw people laughing at him, and bullying him, I felt like I needed to do something," Kristopher said.

So, these two boys decided to step up and reflect the love of Christ!

Both Kristopher and Antwan went home to their own closets and bagged up clothes to give to Michael. Antwan even gave up a pair of brand new shoes he had just received.

They brought the clothes to school and surprised Michael with them.

When the two football players first approached Michael, the bullied student was somber. He was probably even worried this was some kind of prank.

"He wasn't smiling or anything,” Kristopher recalled.

But then Kristopher and Antwan handed over the bags of shirts, pants, and shoes. They wanted to put an end to the bullying over clothes and atone for the part they played in it.

"I told him, ‘we're in the same third period and I apologize for laughing at you and I want to give something to you to make it up’," Kristopher explained.

The act of kindness meant the world to Michael, who instantly lit up. His joy over the gift deeply touched both boys.

"It was a weak moment for me. I almost cried," Antwan said.

And the moment was made even more touching when Michael shared how rarely he experienced such kindness.

"And then I cried at lunch when he said, ‘you two are the only ones to give me a gift,’" Kristopher said.

Michael still lights up when he talks about, what he calls, “the best day of my entire life.”

WATCH: Act Of Kindness Changes Everything For Bullied Student

Since then, the football players’ act of kindness went viral, with praise pouring in for the Christ-like compassion they showed in the face of bullying about clothes.

“Kristopher Graham, It takes a big man to admit his mistakes and correct them. You are a real-life hero. Thank you both for your good deed. I pray God blesses all three of you boys!” one person wrote.

“As an 80+ YO I am very pleased to see the future of our Country is in such good hands as these two young men. Their Parents should be congratulated for instilling a caring and loving mentality in their children. May God Bless all involved in this beautiful show of Christ’s message,” another person wrote.

“You are a great example for all of us! You represent the best that exists in humanity. Thank You!” said another.

And in addition to the encouraging words, lots of people have been calling the school so they can send Michael even more clothes!

YOU MAY ALSO LIKE: Boy with Autism Only Had 1 RSVP to His Birthday Party Until A High School Football Team Caught Wind

Bullying about clothes or any other reason shouldn’t be tolerated. Seeing these young men stand up for what is right truly restores our faith in the future generation!