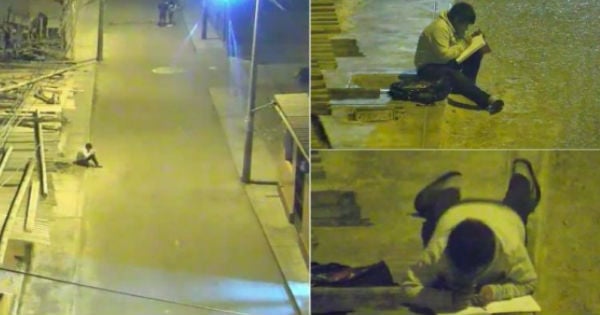 Tennessee police officer Zach Little was feeling pretty low after a funeral procession in the pouring rain. But a boy named Levi changed everything with a random act of kindness!

The work of a police officer is no easy job. Not only is it dangerous work, but also often a thankless job.

And that’s what makes the envelope a young boy named Levi handed the Tennessee police officer so special!

Zach was drenched to the bone after helping with a long funeral procession in the rain. In addition to getting soaked, Zach felt sorry for the family who had lost two of their loved ones.

But God had already lined up the encouragement the Tennessee police officer needed at just that moment. And it came in the form of little Levi!

“I was pulled over in a bank parking lot drying off,” Zach Little explained on social media, “when a younger boy (around 10 yrs old) hopped out of this car and ran me an envelope and said to me ‘thank you for your service sir’.”

Confused, Zach asked the boy’s mother about the envelope her son had handed him.

“It's an act of kindness,” she told him before pulling away. “And please be safe.”

Opening the envelope, Zach found a $1 “reward” and a note from Levi that completely changed his day!

The sweet letter from Levi described police as “the bravest men and women I ever knew.” And it broke the little boy’s heart to see the “hate and harassment” officers sometimes receive.

And so, this precious child decided to combat the hate with acts of kindness showing he “backed the blue.”

“It was very heartwarming. I was having a difficult day and this really lifted my spirits,” Zach said.

And while some may consider the timing a coincidence, we know it was divine. In fact, Zach said he had never received a “gesture of this nature” before.

After recounting the incident on social media, Levi’s act of kindness helped inspire so many others, too. And that’s precisely why the police officer decided to share it.

“I hope that people are reminded of the power of random acts of kindness,” he said.