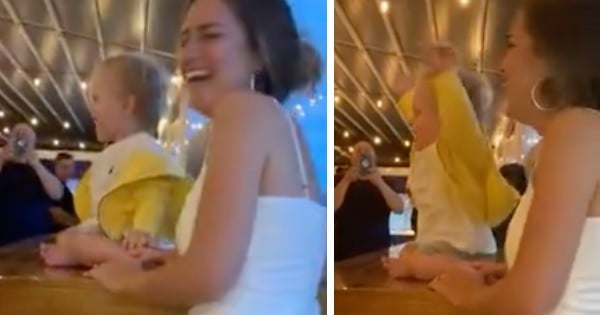 Adorable Toddler Flexes Muscles And Before You Know It, He Has The Whole Restaurant Cheering
Read Article »

One toddler had the time of his life running onto the field at a recent professional soccer game. But his mom made an epic save when she rushed onto the field after him to scoop him up!

The 2-year-old boy named Zaydek ran onto the field at a FC Cincinnati vs. Orlando City SC soccer match. Like any toddler would do, this little boy was not content to just peacefully sit and watch the game. He wanted to get in on the action! And that is just what he did!

RELATED: Heroic UPS Driver Spots Child In Danger And Races Across Busy Street To Save Him

Once he ran onto the field, his mother, Morgan Tucker, was right behind him, chasing him at a full sprint. And the hilarious scene was caught on video! That video was shared online, and it went viral, with many people sharing funny comments about it.

“Toddlers only have two speeds: zoom and asleep,” wrote one person.

“No one puts baby in the corner kick!” commented another person.

Even though this incident was hilarious for others to watch, it had to be a stressful moment for the mother! But Morgan said that she still had a great time at the soccer game with her son.

And the home team, FC Cincinnati, did not seem upset at all by the little one running onto the field during the game.

YOU MAY ALSO LIKE: Boy's Police Officer Dad Died Over the Summer So Cops Show up for Son's 1st Day of 4th Grade

It is safe to say that Zaydek had a fun time at the game, and it is a moment that his mother will never forget!

WATCH: Mom Tackles Two-Year-Old Son After He Ran Onto the Field

LISTEN: 9-Year-Old Boy from Oklahoma Goes Viral With Heart-Wrenching Plea To Find A Family | 114-Year-Old Is The Oldest Person In America And Here's What She Has To Say About Worrying