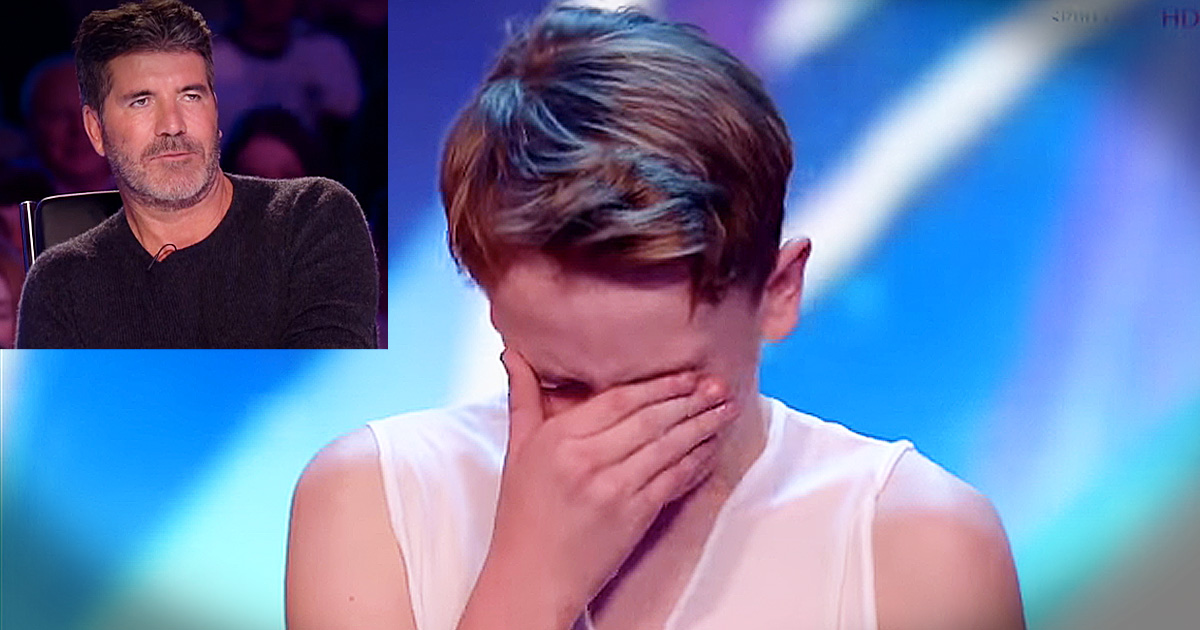 When Stacy Halstead got a call from daycare, it changed her family’s lives forever. Her 2-year-old son, Tripp, was in a freak accident. While doctors expected the toddler to die, miraculously, the sweet boy kept fighting for several more years.

Of course, the journey was anything but easy, and Tripp was never the same. One question — Why? — could have easily torn his family apart. Instead, this amazing family found strength in prayer, faith and most importantly, God.

For years, that decision inspired over a million folks to follow the online updates posted by Tripp’s parents, Stacy and Bill, on Facebook. It’s been a journey fraught with ups and downs, laughter and tears. Now, as Tripp heads to Heaven, his family’s unshakable faith through the whole journey makes for a truly inspirational story.

Stacy describes her life growing up as blessed. She had terrific parents and in 2006 met the love of her life, Bill. A year later in 2007, they married. By 2008, the couple was ready to try for a baby.

It proved more challenging than the couple had expected, but by God’s grace and the help of a fertility specialist, Stacy gave birth to a precious, baby boy in September of 2011. They named their angel Tripp.

"He was great," Stacy explains. "He slept great, ate great, everything was good.”

Tripp’s amazing demeanor as a baby carried on into the toddler years.

“He was an awesome toddler. He was in daycare and so smart. Before the accident, he was saying sentences, he was extremely social – he wanted to be included in everything."

Tripp’s happiness was contagious. Stacy says even strangers felt drawn to him. He loved going to daycare, and the folks there loved him right back. They were like a second family.

Stacy dropped Tripp off at daycare on a day that started just like any other. But by 11 am the daycare was calling, though it took a while for Stacy to realize just how serious things were.

"They said Tripp had an accident and I needed to come right there," she recalls, through tears. "I didn't even ask how bad it was. In my mind, I was thinking, ‘Great, he broke his arm or leg,' nothing tragic."

RELATED: 13 Real News Stories That Show God At Work In The World

But before she could make it there, she got another call from the daycare. And that’s when the horrifying reality began setting in.

The daycare let Stacy know Tripp had been transported to the hospital and she should go directly there. The next call was to tell her that her baby boy was being airlifted to the children's hospital in Atlanta, and that’s when the gravity of the situation really sunk in.

"I was hysterical," she recalls. "I told my husband and mother that something traumatic happened — I said I wanted to meet them at the local hospital before he was taken by helicopter. That's when I got the full story.”

Tripp and his classmates had been playing a game called "Ready, Set, Go" — where the children would run back and forth across the playground. His classmates had grown tired of the game, but the effervescent Tripp was playing. He was leaning up against a fence when a terrible freak accident occurred.

A loud cracking sound echoed through the playground, as a large branch suddenly broke off of a tree, landing directly on Tripp’s head.

Everyone assumed the little boy was dead. But miraculously, he wasn’t. The only reason he wasn’t was because of the fence.

Tripp lay on the ground, unconscious, amidst the screams and cries from everyone around him. There was no blood — it looked just like he was sleeping. The peacefulness concealed just how critically serious his injuries were.

"I was in shock. It never occurred that it was life-threatening. I just thought, ‘He's hurt, and they're gonna fix him,' " Stacy explains.

But once Stacy and Bill arrived at the hospital, the doctors explained that Tripp had undergone severely extensive brain damage. They were doubtful he’d survive the surgery his condition required.

"We gave him as many kisses as they would let us, told him it would be OK and that we would see him soon," Stacy recalls.

And that’s when the family started the Tripp Halstead Updates Facebook page. It was a place for Stacy to share what was happening, as well as pray with a community of followers that has since grown to over one million people rooting for little Tripp.

Through the power of prayer, Tripp pulled through the surgery. But a few days later, the immense swelling was causing his body to shut down. Again, his anguished parents were told to say goodbye to their son.

"A nurse told us she could bring in a hospital bed so that we could lay with him until he passes,” Stacy recalls. “I went into the bathroom and screamed into a towel. Bill came in and told me, ‘It's gonna be OK. Even if Tripp doesn't make it, it's gonna be OK.' "

Yet another risky surgery was performed in which doctors tapped Tripp’s spine in order to drain fluid from the brain. Again, thousands prayed for a miracle. And again, Tripp survived when it seemed impossible. 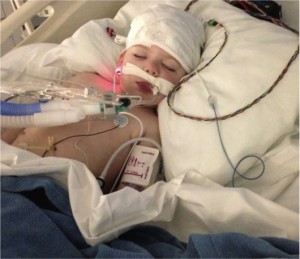 From there, things started to slowly get better. Tripp’s breathing tube was removed, the boy woke up and his parents were able to hold him for the first time since the freak accident.

"It was very, very nerve-wracking because I didn't want to hurt him," Stacy says. “They set me up in a chair. It was very sweet."

Rehabilitation was going well before the family hit another major set back.

The damage to Tripp’s brain caused his body to stiffen up. He underwent another procedure to install a pump to administer a drug to keep his muscles loosened. 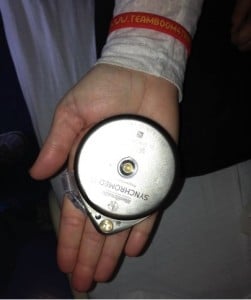 Unfortunately, the surgery left Tripp with a bacterial infection called ventriculitis that was more threatening than the freak accident itself.

The hardware had to be removed, and all of the major steps he’d taken during rehab were reset. He could no longer wave, swallow or kick a ball — all of the progress he’d made was wiped out.

It was incredibly trying for the family, but they clung to their faith and the prayers the support community continued to offer up.

Finally, Tripp was able to go home, where he and his parents adjusted to a very different lifestyle than they’d had previous to the freak accident. Tripp required round-the-clock care. He was very stiff and his condition caused him to throw up at least 10 times a day.

But this faithful family persevered, and those following their inspirational story continued to pray and cheer them on from all over.

Gradually, things got better. A year after the freak accident and Tripp was able to start at a special-needs preschool. 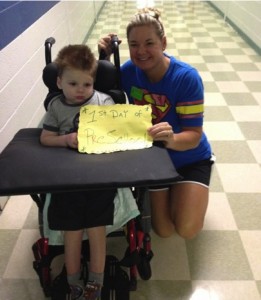 Three and a half years later, he’d undergone 20 surgeries, with more to come. His motor skills hadn’t returned, but his personality did, which was an answered prayer all by itself!

“He smiles, laughs and giggles. But he pouts, cries and gets upset. He's still in a diaper and has a feeding tube,” Stacy explained. “We physically take care of his needs ... but the fact that he can show emotion is all we ever prayed for." 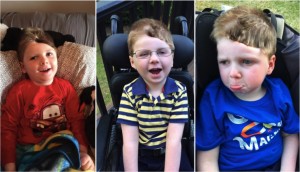 And Tripp’s “village” — an entire online community — continued praying and rooting for his progress. It’s something for which the family is incredibly grateful. As each day passed, Tripp’s parents remained realistic about his prognosis. They trusted in God. Maybe he’d keep getting better here on earth, maybe he wouldn’t.

"I pray a lot," Stacy says. "I believe Tripp will be perfect one day, and that this is only temporary during our time here.”

Though the journey was hard, Stacy and Bill faced it with optimism. They viewed each and every day with Tripp as a blessing. It’s that incredible faith that kept so many following Tripp’s Facebook page. And when it finally came time for Tripp to find healing in Heaven, Stacy and Bill had support and condolences pouring in from the entire online community.

As a result of Tripp’s freak accident, things could turn on a dime with his health. On March 15, 2018, Stacy went to wake Tripp up and was immediately concerned with his labored breathing.

“I could see his little chest going up and down and his heart rate was high,” she wrote on Facebook.

Things continued getting worse as she rushed him to the hospital. There, doctors found Tripp had another infection (the winter months were rough on him). This time, his little heart just couldn’t keep up. A completely stunned Stacy posted the heartbreaking news online that night.

“Our amazing, perfect, beautiful miracle of a son, Tripp Hughes Halstead passed away at 5:47 pm today. . . We love you Trippadoo and you will never realize the impact you made on our lives. . . His little body was just done fighting this last infection.”

Hundreds showed up at the 7-year-old’s funeral, some who knew Tripp personally and plenty of strangers who rallied behind the family on Facebook. Thousands more mourned online.

“To say this is a hard day would be a drastic understatement,” Tripp’s dad, Bill, told the crowd. He also recalled how Tripp died in the arms of his loving parents. “I can say I saw his first breath and his last. He was never alone in his journey. Never. From birth until he went to sleep.”

Inspirational Story — Faith & Prayers To Carry Them Through

Sometimes it’s difficult to find the purpose behind the bad things in life. . . to find an answer to the why’s of life. And that’s where faith comes in. Our God is a powerful God, and He can truly use anything for a greater good.

Stacy and Bill continue to lean on their faith to carry them through this devastating loss. The confidence that they will see Tripp again one day in Heaven keeps them going. So do all the prayers and support received through the Tripp Halstead Updates Facebook page.

We may not have an answer to the question of why this tragedy happened. But it’s clear to everyone that God gave Tripp’s life a very special purpose. And so, we hope you’ll join us in continuing to pray for this family.

“My comfort in my suffering is this: Your promise preserves my life.” Psalm 119:50

YOU MAY ALSO LIKE: True Inspirational Story Of Baby Born With No Kidneys