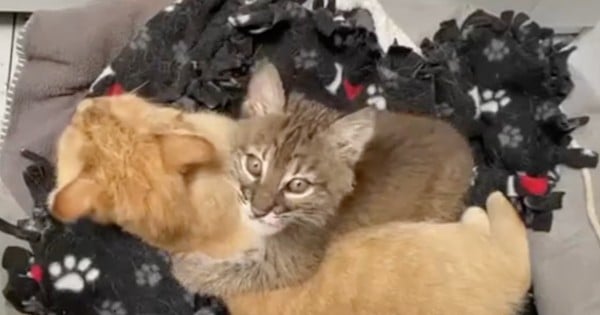 Travis Tritt and his wife have made a good friend in Oakley, the deer that, as a fawn, found its way to the Tritt family home. And, while Mr. Tritt first sang about "T-R-O-U-B-L-E" back in 1992, Travis and his wife Theresa were instead a major blessing to frail and fragile Oakley!

The deer first appeared in August 2021. While Travis was having coffee on the porch of their home in Hiram, Georgia, the deer, which had been orphaned, showed up.

Theresa named the lonely deer Oakley. And Travis Tritt and his wife became determined to give Oakley the special attention he needed in order to bring him back to health.

Theresa bottle-fed the fawn until he was healthy and strong and able to live independently in the woods. Then, Oakley went on his way. But, over a year later, Oakley returned for a visit, and what a sweet reunion it was!

Deer Returns To Say Thank You

In November 2022 while walking on his 45-acre property, Travis ran into Oakley after not seeing him in over a year. The buck came right up to Travis, who shared, "I had not seen him in years until he snuck up behind me as I was walking my property tonight. He obviously remembered me and knew I wasn't a threat. Nature is amazing!"

RELATED: Her Dad Was Dying, And God Sent A Deer As A Special Messenger

Oakley didn't just greet Travis. He allowed Travis to pet and scratch him, and he then returned the favor by licking the singer's arm. In an Instagram video shared by Mr. Tritt, we hear Travis talking to Oakley and telling him he's "a good boy." Oakley lingers with his old friend. It's clear that a bond was formed between Travis and Theresa and their forest friend. What a friendship it is-born out of kindness, trust, and appreciation!

WATCH: Deer Visiting Travis Tritt and Wife after One Year

In addition to at least one creature kid, Mr. and Mrs. Tritt share three children. You can learn more about Travis, Theresa, and their sweet family in the video below.

YOU MAY ALSO LIKE: 4-Year-Old Goes Outside To Play And Then Mom Spots The Boy With A Deer

"A gentle answer turns away wrath, but a harsh word stirs up anger." Proverbs 15:1