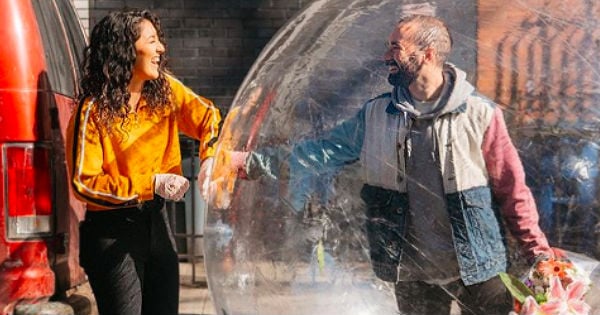 There’s a beautiful poem that’s making the rounds right now. Perhaps you’ve seen it. The post usually starts with something like, “And the People Stayed Home Poem by Kathleen O’Meara written in 1869 and republished during the 1919 Pandemic. This is timeless.” (If you'd prefer to listen to the audio version of this story, scroll to the end of this article to find the podcast version below!)

It’s a really beautiful poem about some positive things that happened in the midst of a pandemic. That part is true. But the rest of it. . .well, read on for the real story behind the viral poem.

Was ‘The People Stayed Home’ Poem Written in 1869?

Some claim that the poem was written after the Irish potato famine. Some say that it was reprinted during the 1919 pandemic of the Spanish flu (which is actually known as the 1918 Pandemic.) The truth is that the poet actually wrote the poem that starts with the line “And the people stayed home” in March 2020.

The poem shares an idyllic version of the months that are yet to come. The poet shares that the many good things being done during this tough season of social distancing could result in a revitalized world.

Who Wrote the Pandemic Poem, The People Stayed Home?

The poem was in fact written by (Catherine) Kitty O’Meara. Kitty is a retired teacher who lives in Madison Wisconsin with her five rescue dogs and her husband, Phillip.

“I was anxious for the past few months. I knew this was coming and I couldn’t be of service,” Kitty shared. Her husband told her, “Write. Just write again.”

After writing the post, Kitty shared it on Facebook with her friends. “I post stuff like that all the time. I usually don’t get a lot of response. But this found its niche,” Kitty said.

Since going viral, fans have reached out to Kitty from around the globe. Her words have provided comfort and hope in a time when we most need it. “It's just amazing,” Kitty said. “I saw going viral as a gift . . . I was able to offer spiritual care.”

Poem About Hope During Coronavirus Pandemic, Written by Kitty O’Meary

Someone meditated,
someone prayed
Someone met their shadow

And people began to think differently

And people healed.
And in the absence of people who
Lived in ignorant ways
Dangerous, meaningless and heartless,

And completely healed the earth
Just as they were healed.

YOU MAY ALSO LIKE: This Lauren Daigle And Reba McEntire ‘Back To God' Duet Is Just What Our Country Needs To Hear

WATCH: And the People Stayed Home, A Poem by Kitty O’Meara