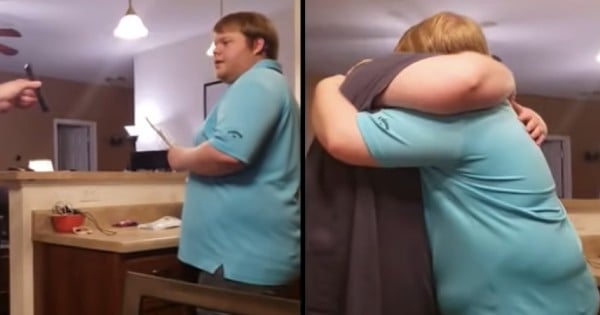 "Jacey Birch, WPLG’s Morning News Anchor and Animal Advocate Reporter, was waiting to do a satellite interview with the American Kennel Club about ‘Pets and the Holidays'," reads the caption of the proposal video. "What she didn't realize is that the interview was a set-up by her boyfriend, Meteorologist Trent Aric, who also works at the station. After a few planned ‘technical difficulties,' Trent pops up on screen with a surprise!"

RELATED: Photographer Gets 2 Secret Message & Catches the Moment a Couple Proposes at the Same Time

What a great surprise that Trent planned for Jacey! Before the weatherman proposes, he first rolls the sweet video that he made for the proposal. It was so well put together, and it included messages from their loved ones which was so special. From their parents, to nephews, to friends, all of them shared their best wishes for the couple and were cheering them on.

When Jacey first realized what was going on, she just couldn't believe it! You could tell from her face that she was in complete shock.

RELATED: Weatherman Gets Surprise Visit From A Feathered Friend On Live TV

And as Trent was making his way to the studio to pop the question, Jacey was watching the sweet video and was in awe of all that he planned for the proposal.

"I'll never leave your side, I'll never stop loving you, and I can guarantee, forever won't be long enough with you," Trent says in the video.

Once he gets to Jacey, he grabs her hand and the weatherman proposes.

"I have been waiting for this to happen for months," he says. "I love you. Jacey Marie Birch, will you marry me?"

YOU MAY ALSO LIKE: Laughter Abounds When A Dog Named Storm Interrupts Weather Segment Being Filmed Live

She says yes, and the couple shares a tender kiss and embrace. Then their friends congratulate them and celebrate with them. What a heartwarming moment that these two will cherish for the rest of their lives!