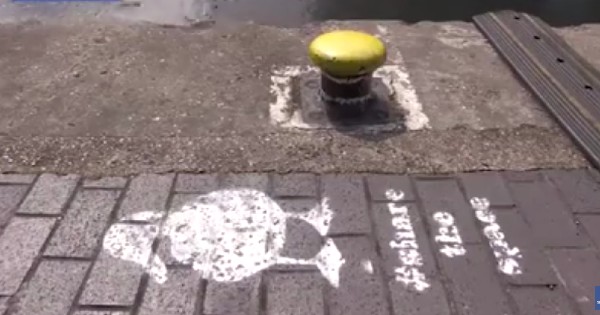 Bear was all skin and bones and most certainly near-death.

He had to have been hungry and in pain. But he was afraid and obviously he couldn't ask for the help he desperately needed.

You see, when we pass a stray animal, it may be easier to comfort ourselves with the thought that someone else will surely help. . .someone more skilled than we are–someone with training. But God isn't necessarily always looking for a trained professional in times of need. He can use anyone who opens their heart to compassion. And he does command us to care for the animals of this earth.

At Evans Creek campground in Washington State, others had surely seen Bear. Some may even have tried to help the poor dog. But the alarmingly emaciated dog was terrified, and not willing to let humans get close. And when Amanda heard of this dog in need, she and her friend, Dylan, knew it was going to take extreme measures if they were going to save Bear's life.

Being that Bear was clearly starving, Amanda and Dylan tried over the next couple of days to lure the dog with food. When that didn't work, they could have easily given up, as others had. But instead, they realized that desperate times called for desperate measures. This dog, alone and scared, felt his only protection was distance. But, perhaps, if Amanda could convince Bear that she was injured and afraid as well, he would let down his guard.

She got down on the ground, in the fetal position, and spent the next few hours slowly inching backwards towards Bear. Occasionally, the dog would growl. Amanda calmed him by whimpering and yawning.

Inch by tedious inch, Amanda was finally able to reach Bear's side. She then spent several hours snuggling and comforting the dog. At last, she was able to slip a lead over his neck. However, Bear was still too scared to move. But he did allow his new companion, Amanda, to pick him up and carry him to the truck. The two friends took Bear to the vet, where he was treated for skin and ear infections.

Once Bear was comfortable his rescuers, he became loving and affectionate. This led the two friends to believe that Bear was not abandoned, but had simply become separated from his family. They are in the process of trying to find the owners, and a local rescue group is prepared to find him a new, loving home if his owners are not located. Thanks to these two friends, who heeded God's call to help, this sweet pup is on the road to recovery!

"A righteous man regardeth the life of his beast: but the tender mercies of the wicked are cruel." Proverbs 12:10