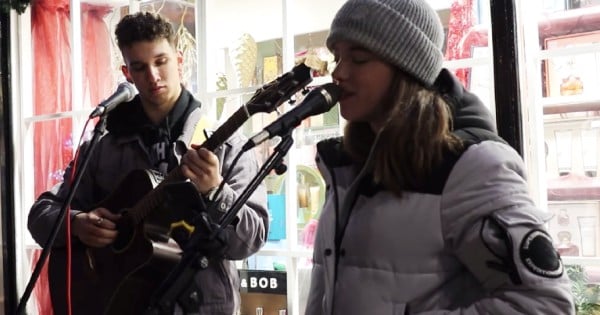 Scotty McCreery sings one of his favorite hymns, ‘The Old Rugged Cross’. And his amazing voice makes the lyrics even more powerful!

If the name Scotty McCreery sounds familiar, there's another reason you'll want to watch this. He won season 10 of American Idol a decade ago and quickly won over the hearts of country music fans. But you don't have to like country music to listen to this cover!

RELATED: Soul-Stirring Live Performance Of ‘The Old Rugged Cross' By Alabama Is A Timeless Classic

It seems like almost every Christian artist has recorded or performed "The Old Rugged Cross." So where did it come from? George Bennard wrote the famous song around 1912 and had a four-person choir first perform it at a small church service.

Once the song made its way across the country, George sold the song for $500 but continued to use small parts of the hymn during his services.

Till my trophies at last I lay down

I will cling to the old rugged cross,

And exchange it someday for a crown”

RELATED: 8 Popular Hymns To Bring You Back To A Simpler Time

This beloved hymn has been memorialized in three different cities and performed by Elvis Presley and Johnny Cash, among many other legendary artists.

The beauty of the words shines through as Scotty McCreery sings the cover. The calmness and purity in his voice show just how devoted he is to Christ, something we may all forget about from time to time.

The video isn't heavily produced. It looks like Scotty just set his phone up and recorded it in his living room. And there's something really special about that.

It's a humble song and doesn't need a lot of bells and whistles in order for it to make an impact. In fact, seeing this man worship the Lord in his living room may be even more impactful. After all, ultimately it's not about the production–it's about the message. Can I get an Amen?

YOU MAY ALSO LIKE: Scotty McCreery Sings ‘Christmas In Heaven,' A Song For Lost Loved Ones

Then said Jesus unto his disciples, If any man will come after me, let him deny himself, and take up his cross, and follow me. Matthew 16:24