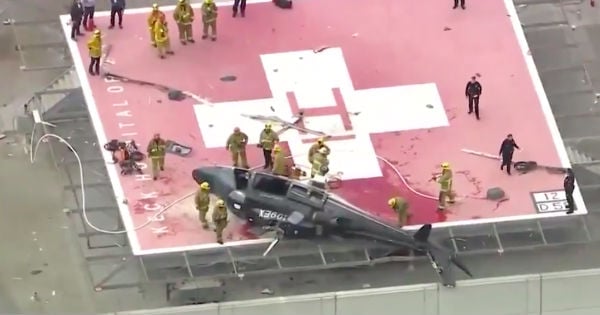 The Chopper Crashed and Doctor Tripped, But The Heart Transplant Was Still Successful
Read Article »

Here's a miraculous story of a man who seemingly lost life and was revived. This man amazed doctors and came back from the dead after his heart stopped for 45 minutes.

Forty five minutes is a long time to wait for some things, including waiting for your heart to start again. Somehow this man defied all odds.

And by all looks and appearances, he came back from the dead.

Michael Knapinski got lost during a venture in the park, and after efforts from several park rangers and searchers he was finally rescued.

He was not unscathed after the incident.

Initially, Michael's plan during his snowy hike was to briefly part ways with his friend and reunite at their designated area – a spot called Paradise. He used his snowshoes to head there while his friend skied over to Camp Muir.

"I was pretty close to the end (of the trail)…Then it turned to whiteout conditions, and I couldn't see anything…I'm not sure what happened. I think I fell."

Man Finds Himself In Danger On Mount Rainier Hike

Then came the scrapes and bruises on Michael's body. Not only that, but Michael was in clear danger of his body shutting down. As dangerous as the cold was that day, he benefited from having this experience in colder weather instead of warmer weather.

The cold weather prevented his body from quickly deteriorating.

Michael's absence at the Paradise parking lot was enough for his friend to know he was in trouble. The friend called and reported Michael as missing.

Three teams of National Park service members searched for Michael well into the following day. Early on Sunday, they temporarily ceased their search as both temperature and visibility became too harsh.

Finally, later that afternoon they found him.

Searches in a helicopter discovered Michael in the Nisqually River drainage, a mile away from the Glacier Bridge. Even after being discovered though, the ground team needed another hour before they could finally reach him.

A helicopter brought him to Harborview Medical Center in Seattle, Washington.

Dr. Jenelle Badulak was one of the first to look at Michael. She found that he had a pulse, but then Michael shortly went into cardiac arrest.

"He died while he was in the ER, which gave us the unique opportunity to try and save his life by basically bypassing his heart and lungs, which is the most advanced form of artificial life support that we have in the world," she explained later.

Michael was legally dead for around 45 minutes while being hooked up to an extracorporeal membrane oxygenation machine (ECMO) and repeated attempts at CPR.

Their ECMO device was used to draw blood from his body where the machine would then separate carbon dioxide and send oxygenated blood back into his body.

Man Came Back From The Dead

The medical staff kept a close watch on Michael after that and two days later he woke up.

Trauma nurse Whitney Holen was by Michael's bedside when he woke up.

"He was crying and they were crying and I'm fairly sure I cried a little bit…It was just really special to see someone that we had worked so hard on from start to finish to then wake up that dramatically and that impressively."

Now alive in the fuller sense, Michael is still recovering. He has reconnected with his loved ones while his body heals. Though his body is not working normally yet, the staff believes his body will return to its normal state with time.

YOU MAY ALSO LIKE: Twin Sisters Both Go Into Labor On Their Birthday And Have Babies 90 Minutes Apart

Aside from physical difficulties, Michael was changed on a deeper level.

He shared, "And as soon as I get physically able, that's going to be my calling in life…Just helping people. ... I'm still just shocked and amazed."

Praise God Michael has been revived and has a new calling on his life!

WATCH: Man Miraculously Came Back From The Dead