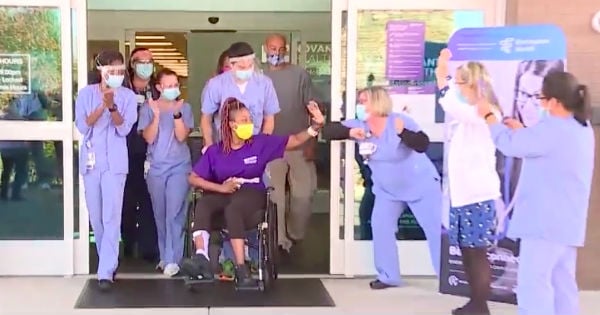 3-year-old Elif Perincek spent 65 hours trapped under rubble from an earthquake. So, when rescue crews finally got her free, she clung tightly to a firefighter’s hand.

It’s hard to imagine the terror of a building collapsing on top of you. But that’s just what happened to so many after a devastating earthquake hit the city of Izmir in Turkey.

And while there are plenty of stories of tragedy from natural disasters like these, many are celebrating one of triumph involving 3-year-old Elif Perincek.

This precious child, along with her family, was trapped under the rubble of their apartment complex. For 65 hours the 3-year-old girl lay in the ruins. And the terror she must have experienced is unfathomable.

Frightened, but alive, the sweet child clung tightly to Muammer Celik’s hand once they finally got her free.

“I thought she might be in the space between her bed and her dresser. I went in that direction and that’s where I found her lying on her back,” the hero recalled. He went on to explain, “I picked her up. I cleaned her face got rid of the dust. She held my finger and wouldn’t let go until we got to the ambulance.”

It was a powerful moment when rescuers surfaced from the rubble with the dust-covered 3-year-old. The crowd clapped and cheered as first responders wrapped her in a foil blanket and whisked off to the hospital.

Later, from the hospital, 3-year-old Elif Perincek was reported to be in good condition. Despite spending nearly 3 days trapped under the rubble, she didn’t sustain any serious injuries. Most of her family made it out safely, but tragically, one of her siblings passed away.

Natural disasters are a reminder of how quickly life as we know it can change. And if we’re not careful, it can be easy to get caught up in the tragedy surrounding these events. But just as little Elif shows us, there are miracles and hope present, too.

YOU MAY ALSO LIKE: Baby Jessica 30 Years After The Well, Declares Her Life a Miracle

Our prayers go out to all impacted by this earthquake and other events like it.

“Be merciful to me, God, be merciful to me, for my soul takes refuge in you. Yes, in the shadow of your wings, I will take refuge, until disaster has passed. I cry out to God Most High, to God who accomplishes my requests for me.” Psalm 57:1-2