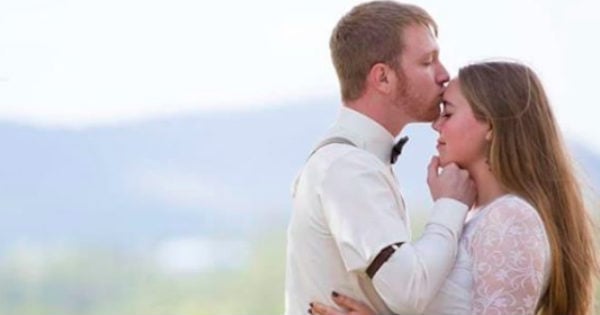 A dad gives jeans, the ones he had on, to to a homeless man in the freezing cold. And our faith in humanity was just restored. Plus, this dad's odd quirk made him uniquely prepared to be God's servant on this day. We'll explain that in a bit!

We're all familiar with the saying, ‘I'd give somebody the coat off my back.' But not everyone has a ride-or-die person in their life to truly be there in their time of need. Thus, we never expect this kindness from a complete stranger.

Quite loving and quite extraordinary.

RELATED: Teen Working at Kroger Hears Senior Citizen Told to Put Groceries Back So He Pulls Out His Wallet

This dad gives his jeans to the unlikeliest of people. Not his spouse, not his child, not even a friend or coworker, but to a stranger.

Johny Hindle is the good samaritan of this story. His story went viral after his fiancée, Courrie Webster, shared his admirable feat online.

"We had just been Christmas shopping and we had been speaking on the way to the petrol station about how freezing it was and how we couldn't wait to get home and get warm."

“At first we thought he was just sitting there until we saw the petrol station worker come out and give him some food and a drink," she added.

Couple Helps Out Man In Need

Courrie chatted with Johny and they agreed to give the man some money to buy food and drink. That way he could take care of himself.

Johny Hindle was worried when he saw the rough sleeper wearing shorts in Wythenshawe, Manchester, and decided to give up his trousers. Speaking about the good deed, his fiancée Courrie said: “Luckily Johny, since I’ve known him, has always worn shorts under his pants and I’d never understood why. I’m now seeing why, as one day this was supposed to happen." 👏 #DailyLADness

“It was only when Johny got speaking to him, he told him that a woman had taken his pants home to wash for him and was bringing them back tomorrow so he had a clean pair."

“Then Johny, without hesitation, took his own jeans off and gave him his pants."

As awkward as most may feel at even the idea of handing over their pants, Johny had an odd quirk about him that made giving up his pants quite reasonable.

“He said he can't stay outside in that weather with no pants. Luckily Johny, since I've known him, has always worn shorts under his pants and I'd never understood why. I’m now seeing why, as one day this was supposed to happen.”

A stranger passing by witnessed the miracle in action. This goes to show that you never know who might be watching you in your day-to-day life.

YOU MAY ALSO LIKE: Zach Williams With A Hand-Clapping, Toe-Tapping Version Of ‘Go Tell It On The Mountain'

If we can do all things with Christ in mind, we can show people Christ wherever we go.

"Therefore, whether you eat or drink, or whatever you do, do all to the glory of God." 1 Corinthians 10:31

The couple returned the next day to give the homeless man more supplies, but he was gone, forced to leave by people who had been harassing him with fireworks. The couple still plans on tracking him down and finding a way to support him.