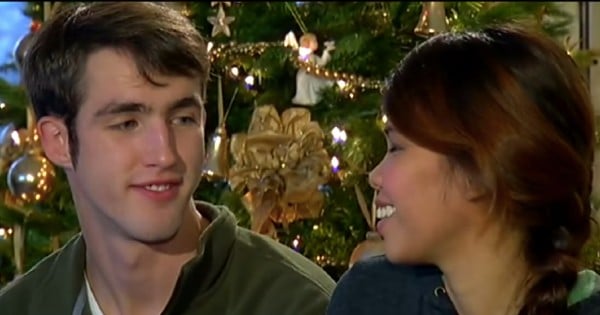 See the little boy far right? That’s Martin. And THIS was the last picture taken before he became very ill . . .and became trapped in his own body.

Can you even imagine being completely aware of everything happening around you, but being unable to move or speak? How completely alone you’d feel if everyone continued to talk in front of you as if you didn’t even exist.

When Martin was just 12 years old, he was hospitalized with Cryptococci Meningitis. His condition became very severe and he slipped into a coma, leaving him unable to move or even speak.

His parents were crushed by the devastating news and brought him home where they devotedly cared for Martin.

But instead of dying, Martin just kept going.

And so, for 12 years, the parents lives revolved around caring for their son. Martin’s dad, Rodney Pistorius, woke up each morning at 5 AM to get Martin ready and take him to a special care center.

In the evenings, Rodney would bathe him, feed him, put him in bed, set my alarm for two hours so that I’d wake up to turn him so that he didn’t get bedsores.

Feeling completely desperate, Joan remembers once telling her son, “I hope you die.”

“I know that’s a horrible thing to say. I just wanted some sort of relief,” she said.

During all those years, Martin never showed any signs of improvement and his parents had all but given up hope that their beloved Martin would ever recover.

But just when they had given up–everything changed! One day, out of the blue, Martin got a miracle. They began to notice subtle signs that he was responding to the conversation surrounding him!

Martin began to get better and stronger day by day. And finally, he was able to share exactly what it was like being trapped in his own body.

Martin told his parents he was “aware of everything while trapped in a vegetative state" even his mother’s hurtful comment.

Aware of everything, but unable to say anything, Martin said he’d sunk into a very dark place and began to feel himself vanish. He became convinced that no one would ever show him tenderness or love him ever again.

“Everyone was so used to me not being there that they didn’t notice when I began to be present again. The stark reality hit me that I was going to spend the rest of my life like that totally alone,” Martin explained

“You don’t really think about anything. You simply exist.”

Can you even imagine how frustrating it must be to have no say over even the most basic things in your life? No control over what you eat, drink or even watch on TV?

“I cannot even express to you how much I hated Barney,” Martin said about the children’s television program that used to play on an endless loop at the care center.

All of that is behind Martin now. After 12 invisible years held prisoner in his own body, he was able to get an office job.

Martin was eventually even able to relate to his grieving mother. As time passed, I gradually learned to understand my mother’s desperation. Every time she looked at me, she could see only a cruel parody of the once-healthy child she had loved so much.

Now, Martin is 39 years old and lives in England with his wife Joanna.

He has written a book about his ordeal called, “Ghost Boy: My Escape From a Life Locked Inside My Own Body.”

God sent Martin a miracle that changed his life forever. Not everyone may get that miracle. But Martin’s story is a powerful reminder that everyone, no matter how different they may be, is a person and deserves to be treated with love, patience, and understanding. I pray we may never forget that!