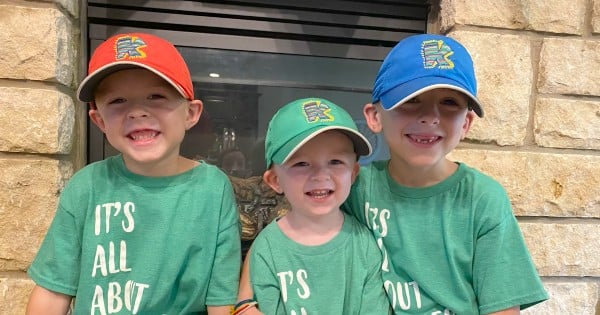 When doctors told Evgeny Anisimov he had a baby with Down syndrome, his wife wanted to give the child up. But instead, this brave dad sacrificed everything so he could raise his beautiful son alone. And he’s committed to encouraging others with his inspiring story!

When Evgeny Anisimov of Russia and his wife welcomed their first child together, they celebrated for only 1 minute and 39 seconds. The doctor’s words took things in a very different direction:

"I fear that your baby has Down syndrome."

The diagnosis shocked Evgeny and he even shed some tears, realizing there would be obstacles to overcome in raising a baby with Down syndrome. But this changed nothing about the love and commitment he felt towards his child.

“At no time did I think of leaving my son in an orphanage,” he said. “That would be inhumane."

Sadly, his wife and her family didn’t feel the same way.

Mother Rejects Baby With Down Syndrome

After the doctors explained that little Mishka had an extra copy of chromosome 21, resulting in Down syndrome, his mother no longer wanted him. Her parents recommended the couple turn the baby boy over to an orphanage.

“Let the state take care of him,” Evgeny recalls his father-in-law saying. “And you will still give birth to a healthy one, and your life will be joyful, not in sorrow.”

Thankfully, Evgeny Anisimov saw his baby with Down syndrome just as God intended — as a blessing. He refused to give his son up, even if that meant raising him alone.

His wife’s reaction came as a shock. They’d had a good marriage up until Mishka’s birth and usually shared the same values. But the two didn’t agree on what to do with Mishka and wound up going their separate ways.

Even so, Evgeny forgave his wife for the decision she made.

“Now I understand that she was just scared at the time,” he says. “She started to act according to the wrong scenario.”

Evgeny gave up everything he knew from his life before in order to be a good father to Mishka.

RELATED: Mother of Twins Didn't Know One of Her Daughters Had Down Syndrome Until 24 Hours After Birth

“I had a good job in Moscow and this was a big turning point in my career, but I couldn't leave my son,” he said. “He needed love and warmth.”

Though it meant sacrificing a life he once cherished, Evgeny was committed to giving his baby with Down syndrome all the love he deserves.

"When a child is born, he asks the outside world: ‘Am I needed here or not?' And I answer with certainty: ‘Son, you are needed!',” Evgeny explains.

Now, Evgeny Anisimov lives as a single father raising his “sunny” child. He dedicates his time to helping his son develop physically and mentally. And even though it cost him his wife, Evgeny is happy with his choice to stand by his son.

This brave dad is also sharing the story of his baby with Down syndrome as a way of inspiring and encouraging others.

Evgeny Anisimov works hard to raise awareness about Down syndrome. He seeks to inspire acceptance and inclusivity for those with special needs. And he wants his story to encourage others who are facing similar difficulties.

“I also want to support, inspire with my example those people who are or will be in the same situation as me,” the single dad says. “Have no fear! Everything will be fine!”

YOU MAY ALSO LIKE: True Story Of Father's Fight To Save Newborn Triplets Mom Wants To Give Up

Following God’s plan for us rarely comes without sacrifice. But what we give up always pales in comparison to what we gain.

“Let it not seem to you that one of these little ones is of no value; for I say to you that in heaven their angels see at all times the face of my Father in heaven.” Matthew 18:10