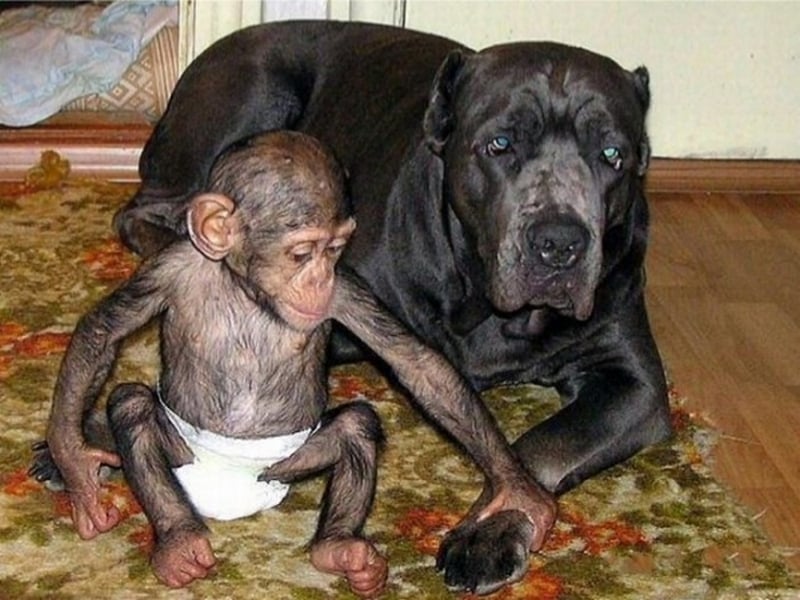 Orphaned Chimpanzee Gets Adopted By A Family Of Dogs
Read Article »

Princess Lacey is what the entire university called her; she was their biggest fan. She had an extra special relationship with basketball player Adreian Payne. On Senior nigh when it was Adreian’s turn to be honored, the 6-foot-10 basketball player picked up Lacey and paraded her around the court like a true princess. And after Michigan State won the Big Ten tournament, he paraded her around yet again.

Lacey’s parents discovered of a football-sized tumor that engulfed her kidney in 2011. Another tumor wrapped around her spine. Â She lost feeling below her belly button and couldn’t walk for several months. During that time, Adreian visited little Lacey and that’s how they become buddies.

Lacey’s father, Matt Holsworth, shared that Lacey went to heaven with her mommy and daddy holding her in their arms.

“She’s been an inspiration to all of us,” says Michigan State basketball Coach Tom Izzo. “I can only tell you that her message that should be sent is, ‘Don’t ever give up on anything. Don’t ever quit. When you face some tough times, like all of us will, make sure that you just keep fighting through it.'”

Lacey knew that it was her time. While on vacation she turned to her dad and said, “Dad, I’m tired, I think it’s time to go home.”

Coach Izzo broke down in tears while remembering that statement and he pointed up at the starry night sky and said, “I think that’s home.”

“She taught us a lot¦ her parents told me tonight she was smiling when she died,” Coach Izzo encouraged many and went on to say, “So if you can take something from a bad situation and make it good. When you’re struggling, finals coming up, tough times, something goes wrong at home, think how lucky you are to have what you have. And learn from her that you don’t have to be the biggest, the strongest to be tough, you just got to have a mentality and mentality has no size.”

Through everything, Lacey was always was smiling.

“She loved unconditionally and without hesitation,” said Lacey’s Dad and the best way to carry on the Princess’s legacy is to do the same.