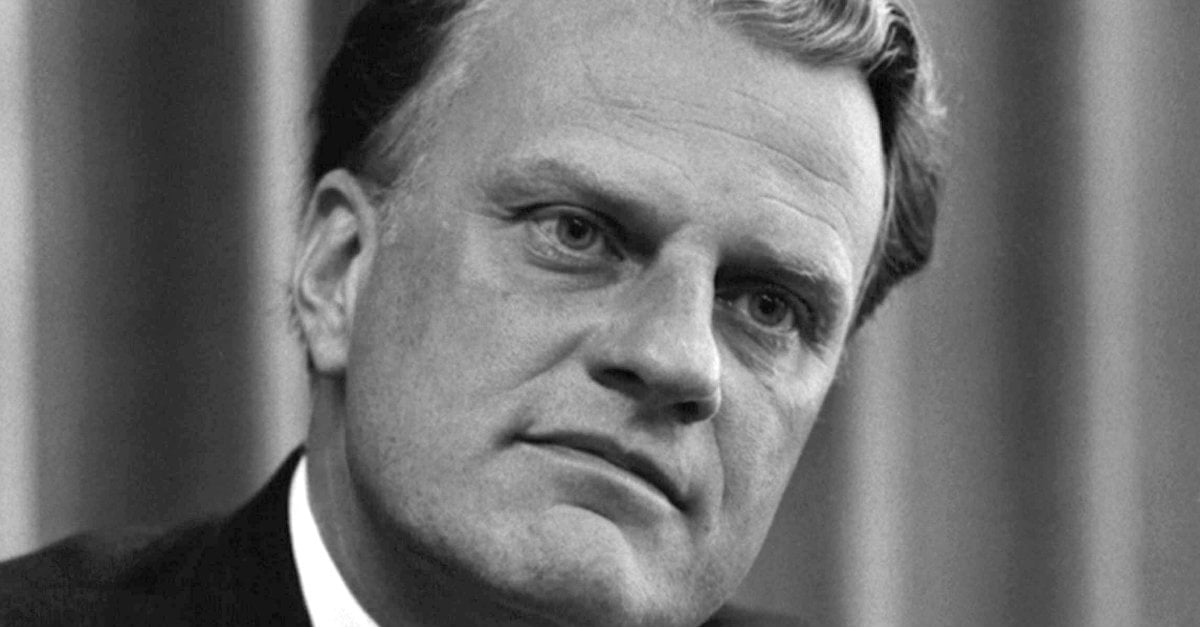 On February 21, 2018, the world lost a great man. Reverend Billy Graham died at age 99, heading, at long last, to his eternal home with Jesus after serving our Lord so well and for so long here on earth. He touched so many lives with the Gospel. In fact, Billy Graham inspired Chip and Joanna Gaines so greatly in their faith, you could say it helped make them who they are today! (If you’d prefer to listen to the audio version of this story, scroll to the end of this article to find the podcast version below!)

If you've ever watched the incredibly popular HGTV show Fixer Upper, you know there’s something quite different about the husband and wife duo Chip and Joanna Gaines. That “something special” caused millions of viewers to fall in love with the down-to-earth couple who seem to succeed in just about anything and everything they do.

Now, clearly, these are two very talented people. But there’s way more than talent behind their prosperity. The secret to Chip and Joanna Gaines’ success boils down to one thing — their faith.

And the flames of that faith have been fueled and fanned over the years by Spirit-driven teachers. Great teachers like the Reverend Billy Graham.

"The impact that man has had on my life is immeasurable," Chip said.

Thankful for the life and work of the truly inspirational @BillyGraham. His simple message changed my family forever. Thank you Mr. Graham, may you rest in peace.

Chip’s journey with Jesus started in 1975 at a Billy Graham Crusade building when he was just a one-year-old ginger baby. That night, Chip’s mother Gayle rededicated her life to Christ and became serious about her faith.

“Even though my mom had been baptized at the age of 8, she decided to go forward to answer the invitation to believe,” Chip recalled. “My parents made attending church a priority, (which) strengthened their marriage, and they involved themselves in a young couple’s Sunday school class. In the 1990s, my mom worked at Word Publishing, which published books for Billy Graham. She found continued encouragement in his writing.”

And as Chip grew older, God continued to use the work of Billy Graham to pour into his life.

Chip attended college with Billy Graham’s grandchildren, and when he spent a week at their home, it was their father, Danny Lotz, who began to take Chip under his wing.

“He wasn’t a pastor, but he was influential in showing me how to live out my faith, even in a secular environment,” Chip said. “He impacted my life by spurring me to shape my choices with my faith and to walk in my faith regardless of my ‘calling.’

RELATED: Billy Graham's Advice For A Man Who Said His Faith Had Faded

Danny discipled and mentored Chip, teaching him how to live more like Christ.

“He challenged me to process what God was doing in my life and train my mind with God’s truth. I learned so much from him, and he always spoke so highly of (Billy Graham), who he said talked the talk and walked the walk. So, to this day I think about talking the talk and walking the walk because of Billy Graham and Danny Lotz.”

If it weren’t for this strong foundation of faith, the Gaines’ story may have gone very differently. But because Billy Graham inspired Chip and Joanna Gaines so deeply, they were ready when it came time to follow God’s call for their lives.

Who’s watching with us tonight??!! So excited for the #fixerupper Season 5 premiere at 9/8 pm CST! @hgtv ❤ pic.twitter.com/L4KQicsDoK

Years after Chip’s discipleship with Billy Graham’s family, Chip and Joanna were married and pregnant with their second baby. They owned a furnishing store called Magnolia Market, but they were sensing God telling them to trust Him and close the store to focus on raising their family.

Joanna wasn’t sure about the future, but she was obedient, and as she closed the doors to their store she felt like her dreams were closing with it. Ironically, that’s when the peace of God overwhelmed her, and He reminded her to trust Him with her dreams. God made the plans for her life, and they were better than what she could imagine.

“God taught me to study the Word and believe it, even when it hadn’t been fulfilled yet. I really had to cultivate a place of faith that I never had before. I had to trust Him as He would speak His promise to me,” she explained.”This trust brought peace, although my circumstance hadn’t yet reflected his promise. His Word doesn’t return void, and God was working in my heart to establish deeper levels of trust that I now look back on and am thankful for.”

At just the right time, a production company heard about Chip and Joanna’s home renovation business, paving the way for their hit show, Fixer Upper. And the rest, as they say, is history!

Now, with their fifth child on the way, Chip and Joanna are again feeling the call to focus on their family. The announcement that the fifth season of Fixer Upper would also be its final season left many fans broken-hearted.

But since Billy Graham inspired Chip and Joanna Gaines in remaining faithful, they know this is just the next step in the Almighty’s bigger plan. And they are trusting Him to lead.

“Our family has made a commitment to put Christ first, a lifestyle our parents modeled for us very well. They showed us how to keep our marriage and family centered around God,” Chip said.

For many, the fame and success the Gaines have received could easily turn into a pitfall, turning the focus to worldly possessions and accomplishments. But Billy Graham inspired Chip and Joanna Gaines to build a foundation on Jesus.

It’s a foundation available to all of us. Billy Graham’s words have inspired thousands of other believers, leading them to accept Jesus into their hearts and lives. And while we say goodbye to this great man here on earth, we know he is now enjoying the eternal rewards of a life well lived. As Billy once said when his son asked where Heaven was:

"Heaven is where Jesus is and I am going to Him soon!"

If you’d like to leave your condolences or share a special memory of Billy Graham, you can do so by clicking the link below:

YOU MAY ALSO LIKE: Kathie Lee Gifford Reacts To The Passing Of Evangelist Billy Graham