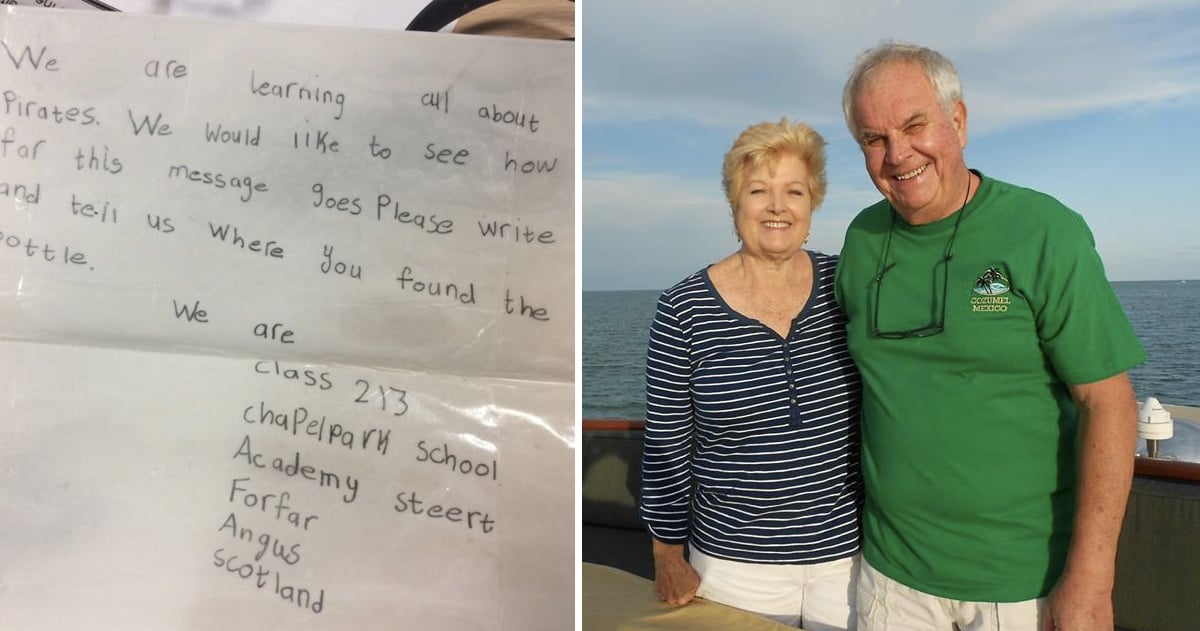 30 Years and 4000 Miles Later, Message In A Bottle Found By Couple
Read Article »

Billy Graham and Bono (U2 Frontman) shared a unique friendship bonded by faith. Bono shared in a poem the encouragement he found through Graham’s messages.

The list of those Billy Graham impacted reaches far and wide. He touched millions of lives through his life as an evangelist, sharing God’s message of love. Graham took the Bible literally when it said "Go into all the world and preach the gospel to all creation.” (Mark 15:15). His mission was to share the redemption story with all who would listen.

One of the many lives that Graham influenced was Bono from the Irish rock band, U2. Bono has been vocal about his faith in the last few years. Like Graham, he too has a passion for sharing a message of love.

The band, U2, was formed in Dublin, Ireland in the late 70’s. Three of the members, Bono included, found faith during it’s early years and struggled to reconcile that with their music. Through ups and downs of what Bono described as denial rather than “willful surrender”, the group eventually found their path to connecting the two. 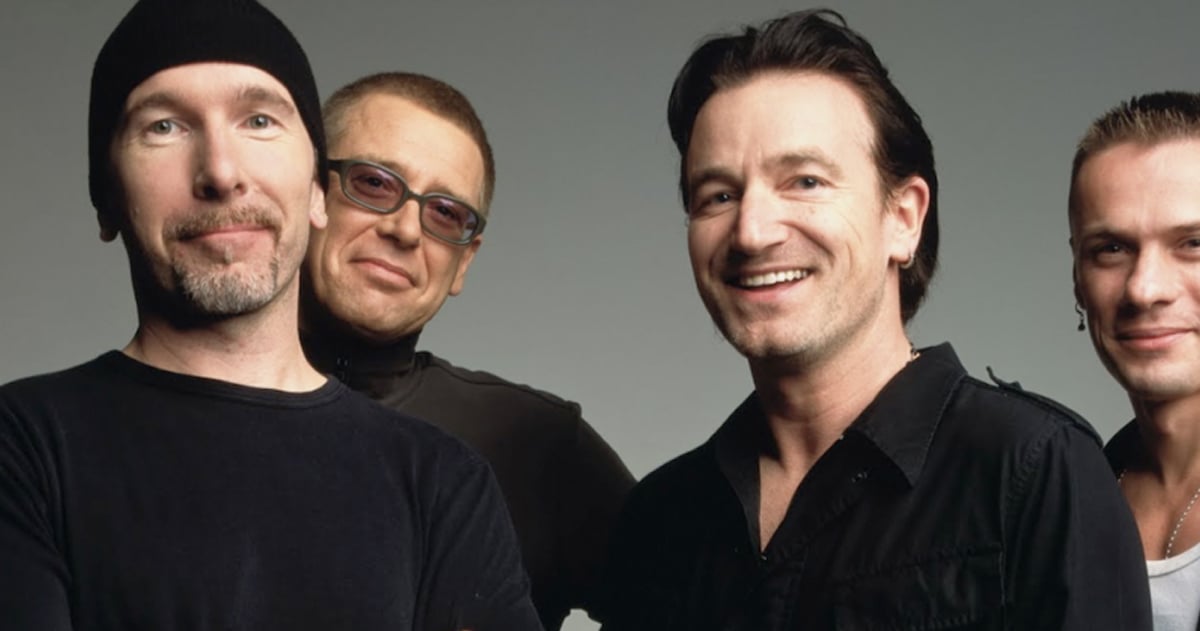 In 2002, Bono received an unexpected call from Dr. Graham’s office. Apparently, Graham wanted to share a blessing with the group. They asked if they would come to Graham’s home.

"Over the years," Bono told writer Catherine Falsani, "I met some preachers who did connect with me, for sure, and whose words return to me. I remember hearing about this fellow called Billy Graham. Church people would push him on you like your friends at school would push Elvis Presley records. Actually, they looked kind of similar – both stars from the South who spoke with a twang and had giant crowds come to see them."

When Bono got the call, he was ecstatic. There was no doubt that he wanted the opportunity to meet Billy Graham and share how his life was impacted.

‘"I told [the band], I said, ‘This is a big deal. This is BILLY GRAHAM!' And they all said, ‘That's great. But we're in the middle of a tour.' So I rented a plane and flew there right away in case he might forget. I was picked up by his son, Franklin, and driven a couple of hours up to their house. I met briefly with himself and his wife, Ruth. …the blessings of an older man mean a great deal to me. Particularly this man.” Bono shared. 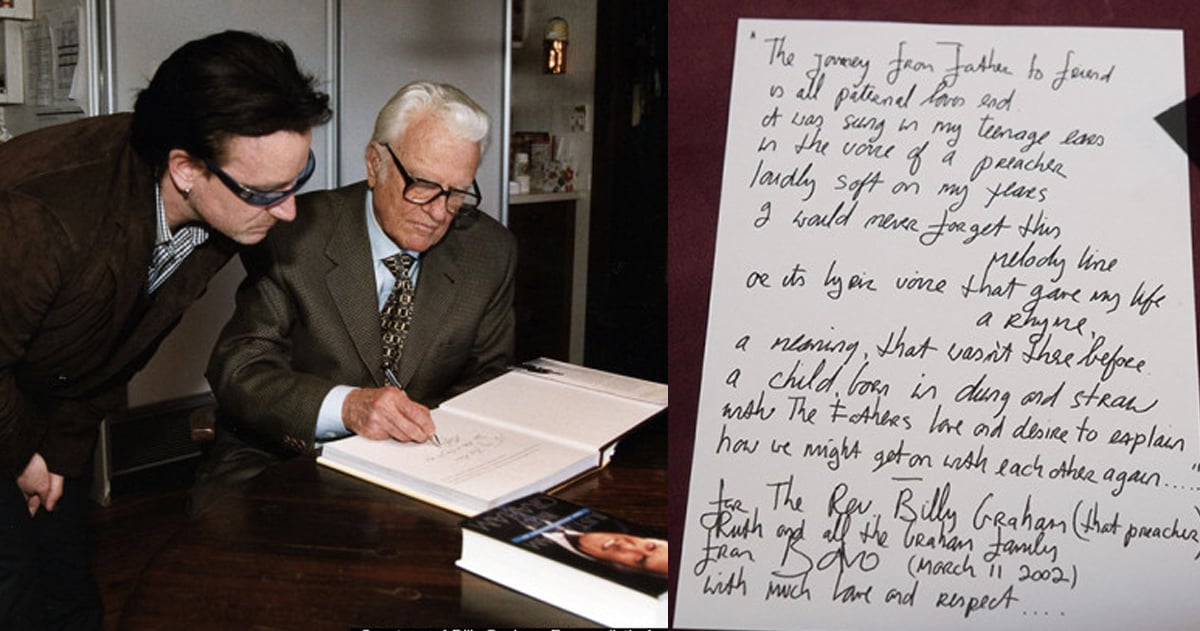 While Bono was there, he gave Graham a gift.

"I gave him a book of Seamus Heaney poetry, and I wrote a poem for him in it," Bono said.

The poem Bono wrote was a way to express how much Graham’s life and teachings had meant to him. Now, it resides on display in the Billy Graham Library.

“The journey from Father to friend
is all paternal loves end
It was sung in my teenage ears
In the voice of a preacher
loudly soft on my tears
I would never forget this
…Melody line
Or its lyric voice that gave my life
…A Rhyme
a meaning that wasn't there before
a child born in dung and straw
wish the Father's love and desire to explain
how we might get on with each other again...”

After his meeting with the Grahams, Bono later teamed up with singer/songwriter Pat Boone and other musicians to create a tribute song “Thank you Billy Graham” for the evangelist.

There is no denying the impact that Billy Graham has had on the world. While he, Bono and all of us are imperfect, there is no denying that Graham “pressed toward the mark” (Phil. 3:14) when it came to his faith walk. His was a true life devoted to following Christ and sharing the message of Hope.

YOU MAY ALSO LIKE: 40 Courageous Quotes from Billy Graham