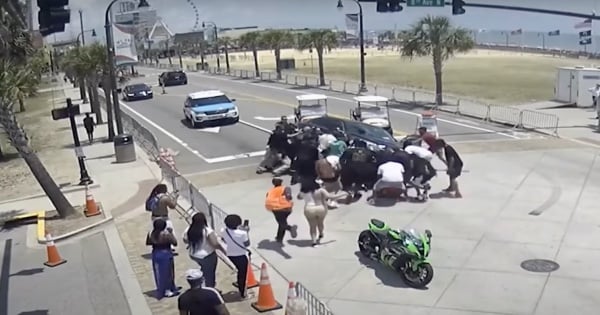 A compassionate state trooper was the pivotal tipping point in this incredible story about saving the life of another.

Sometimes we don't understand how much others are hurting. Sometimes we are just doing our jobs and trying to get through another workday. But sometimes, we get to be the hands and feet of Jesus. A man was ready to end it but a compassionate state trooper changed his mind.

On a Saturday afternoon, the Massachusetts State Police received a call about a man standing on the ledge of a major bridge. In fact, the man had scaled over the protective barrier that is supposed to keep incidents like this from happening or from anyone else accidentally getting hurt. With a heavy heart, Trooper Paul O'Connor responded to the call.

Thankfully Paul had taken additional training and was a member of the Crisis Negotiation Unit. This gave Paul the extra help he needed to connect with the man who wanted to end his life.

We don't know what was said on that bridge. Nor do we know what was happening in that man's life to make him think the only way out was to jump off a bridge.

RELATED: Trooper Shows Compassion to Drunk Driver and 4 Years Later, the Man He Arrested Contacts Him

But what we do know is that God mercifully interceded in that situation and used Paul as a way to communicate with the heartbroken man.

When the man climbed back over the barrier, no words were needed. Instead, Paul held the man in his lap while they waited for help to arrive.

YOU MAY ALSO LIKE: Father's Compassionate Response for Driver Who Put His 10-Year-Old Daughter in the Hospital

“I have seen their ways, but I will heal them. I will guide them and reward them with comfort. And for those who mourn, I will create reason for praise: utter prosperity to those far and near, and I will heal them, says the Lord.” Isaiah 57:18-19