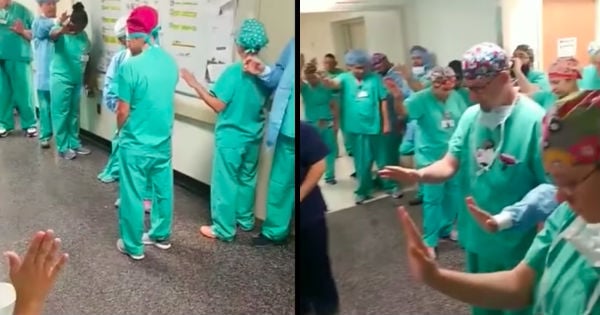 A lifelong lung disorder should have spelled disaster, but Dan Burke is giving God all the glory for his incredible story of survival after miraculously overcoming the coronavirus.

Dan Burke is the founder and President of the Avila Institute for Spiritual Formation, a Christian author, and a theological scholar. He and his wife, Stephanie, host a Divine Intimacy Radio show, where they encourage believers in their faith.

RELATED: The Incredible Story Of Survival For Micro-Preemie Quadruplets Is Nothing Short Of Miraculous

But recently, the couple lived out their faith in an extraordinary way. As Dan battled the coronavirus, he and Stephanie relied on God to write an incredible story of survival!

As news surrounding the global threat of the coronavirus started circulating, Dan Burke immediately recognized the extreme danger the virus held for him.

“If I get it, that will be it for me,” he recalls telling his son.

Dan Burke’s concern stemmed from a lifelong lung condition, putting him at a much higher risk for respiratory issues from the coronavirus.

Things got really scary on March 17, when both Dan and Stephanie, started displaying symptoms.

"I have been hospitalized more times than I can count,” Dan Burke recalled. “However, this one was different. This was a deep and dark spiritual warfare.”

Prayers For a Miraculous Recovery

Doctors diagnosed both Stephanie and Dan Burke for COVID-19. While Stephanie was able to go home and isolate, Dan was in serious danger because of his lung issues.

The couple said goodbye as doctors placed Dan on a ventilator and moved him to the Intensive Care Unit (ICU). Neither Stephanie nor Dan felt certain they’d see each other again, as they truly believed the coronavirus would be a death sentence for Dan.

But God had other plans!

RELATED: Landon Hoffman’s Incredible Story Of Survival After Being Thrown From Mall Of America Balcony

Dan Burke’s loved ones, along with his church family, asked everyone to “storm Heaven with prayer.” They prayed for an incredible story of survival. And it was a time when Dan really needed the support.

While Dan didn’t lose his faith while in ICU, he describes it as a time when he was “stripped bare spiritually.”

As the prayers for Dan’s healing went up, his condition took a miraculous turn. Three days later, he was even strong enough to come off the ventilator. And soon after, he was back at home recovering with his wife!

An Incredible Story Of Survival

“I know I'm alive because of your prayers,” said Dan Burke in a Facebook Live video. “There's no way I should have come out of that ICU.”

As a real-life overcomer, Dan Burke’s incredible story of survival is a beacon of hope for so many. And he’s continuing to allow God to be glorified through his battle with the coronavirus.

“I was supposed to suffer on behalf of others to serve the church,” Dan says.

“I am grateful that I have studied and lived this reality so deeply before facing this kind of storm,” Dan said.

YOU MAY ALSO LIKE: Teen Paige Winter Was Attacked By A Shark And Is Inspiring With Her Incredible Story Of Survival

“Finally, be strong in the Lord, and in the strength of His might. Put on the whole armor of God, that you may be able to stand against the wiles of the devil. For our wrestling is not against flesh and blood, but against the principalities, against the powers, against the world’s rulers of the darkness of this age, and against the spiritual forces of wickedness in the heavenly places.” Ephesians 6:10-12