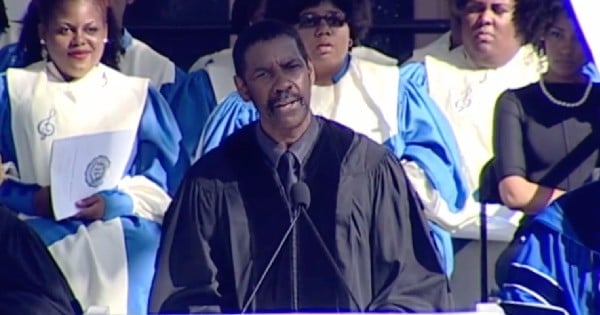 What This Star Told The Crowd Amazed Everyone. His Advice About The U-Haul Hit Me Hard!
Read Article »

His goal was to disprove God’s existence. But what he found changed his life from the inside out. Josh McDowell, while in college, set out on his mission to debunk God and His son, Jesus Christ. This one man’s journey will revive your spirit.

McDowell’s career started out in search of the proof needed to ‘debunk’ everyone’s belief in God and His son, Jesus Christ. But this journey has taken many twists and turns; His life today is all about SHARING the love of Christ and McDowell wants to lead as many people as possible to God’s redemptive love and grace for eternal life in heaven.

Today, McDowell is a world-renowned author and evangelist. At age 75, he is not about to slow down any time soon, either. His latest book, God Breathed, teaches his readers “how the living, breathing word of God speaks directly to [their lives]."

McDowell’s childhood was a tormented one. He was molested for years as a young boy by a man who worked on his dad’s farm. This upbringing led McDowell to abandon all hopes and thoughts of God being who He is and was. By the time McDowell was in college, his #1 goal was to silence the Christians and the Christian Professors.

During his college years, he encountered a group that was ‘different.’ He approached them and asked “Why are you so different? What changed your life?”

But their response only frustrated McDowell even more. They gave credit to their faith in Jesus. McDowell just laughed it off saying, “You’ve got to be kidding!”

It was this group of young Christians that challenged McDowell. And he gladly took the bait. McDowell traveled abroad, examined manuscripts, dissected scriptures all in an attempt to prove everyone wrong. But something much bigger than McDowell happened. He found God. And he couldn’t deny it any longer.

McDowell said, "Intellectually, I concluded that I could trust the Bible and I concluded that Jesus Christ not only claimed to be God - but there was sufficient evidence to support his claims of being God.”

And then it hit him…”if I were the only person alive, Jesus would have still died for me. That is what took me from the evidence into a relationship."

Over the next several months, McDowell’s entire world and perspective changed. It was from that moment on that his devotion and dedication to ministry began.

McDowell would like to empower the younger generations to be better equipped to answer the questions he once asked as a teen. McDowell believes Christians need to listen more and be prepared for the curveballs that nonbelievers will ask.

His hope is that this book, God Breathed, will be a tool in helping the younger generations present biblical evidence which ultimately will lead nonbelievers to Christ.

For a wonderful clip of a recent interview with Josh McDowell, click below: