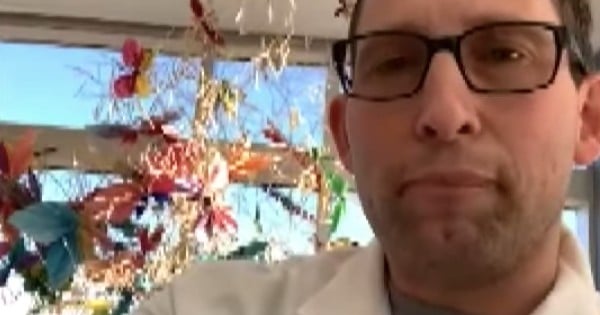 One family in Long Island, New York was scolded through an anonymous letter for leaving up their Christmas lights for too long. And that insensitive letter led a community to rally around that family when they needed it most.

Sara Pascucci got a letter in the mail that read, "Take your Christmas lights down! Its Valentines Day!!!!!!!" And this rude letter really pained her. Because in January, she had just lost her father and her aunt, less than one week apart, to COVID-19.

RELATED: Doctor With Little Time Left Is Touched As Strangers Push To Grant His Dying Wish

Sara's father had lived with her and he was the one who had put the Christmas decorations up. She shared that she just couldn't bring herself to take them down just yet. Also, the family had other things on their mind like funeral arrangements and dealing with the grief of losing two loved ones.

"A major blow to the heart," Sara says about the letter. "No one really knows what is going on inside the house or why we didn't take down the decorations. I couldn't believe someone would do this."

Sharing about the letter on a Long Island Mom's Facebook page, Sara typed out the following:

"For anyone in the Bethpage area - if you know of a person who would do something so insensitive like this please pass along my message.... Our entire family was sick with COVID starting December 24th. Within this timeframe, we lost 2 family members. One being my father," she wrote. "He loved decorating our house every year for the holidays ever since we were children and he took so much pride in doing so. He did it for us, especially for my 2-year-old son who he loved so dearly."

Once the community saw Sara's post, they filled her Facebook inbox with encouraging messages. They even sent her cards, flowers, meals, and started a GoFundMe to help the family cover the funeral costs. And another wonderful thing happened. Their neighbors started to redecorate their homes in Christmas decorations to spread cheer and show their support.

"I was completely floored and overwhelmed," Sara says about the outpouring of love her family has received. "I didn't post it looking for pity. But people should think before doing things like this, especially right now with everything going on in the world."

YOU MAY ALSO LIKE: Girl Was Stuck Riding Bike To Work In The Bitter Cold Until Chick-Fil-A Worker Gives Her Car

And looking back now, Sara says that she is actually grateful for the letter and what it has ended up bringing her family. "I actually want to thank that person, for bringing me all this love and support in a time when I needed it most."

LISTEN: Wife Dies Before Quadruplets' Names Are Even Decided And Brave Dad Raises Them Alone & Dennis Quaid Breaks His Decades-Long Silence to Share About His Battle with Demons