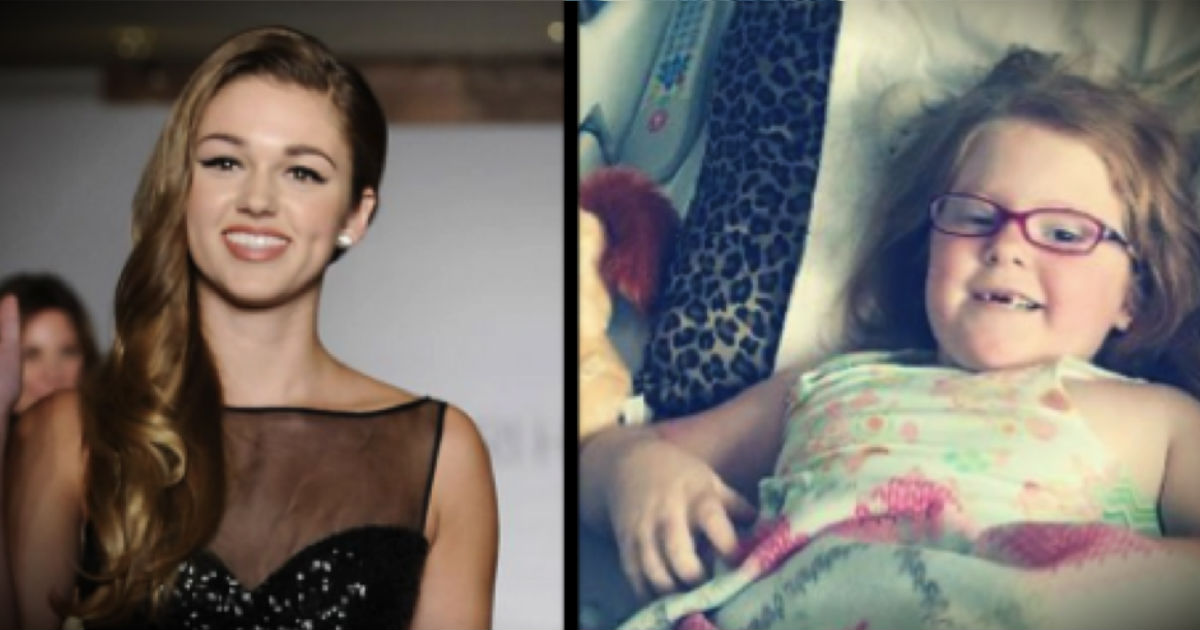 As Christians, we know we serve an awesome God who can do the unimaginable. But soon-to-be mommy, Gemma Edwards, didn't yet believe in miracles. But then God sent her a miracle of her own!

First time parents Gemma and Craig Edwards eagerly awaited their daughter's birth. They had chosen the name Skye, not realizing that this name would have a far deeper meaning once the precious girl was born.

One day, something told Gemma that she needed to get to the hospital. It was 4 days prior to her due date, but God's angels nudged at the mom, telling her it was time.

Skye had to be delivered via c-section because Gemma had an extra bone in her pelvis, making a natural birth questionable. But as the tiny baby was pulled into the world, she let out a tiny whimper and it became immediately evident that something was wrong.

The poor baby was covered in a rash, had a multitude of bruises and had severe heart, blood and lung problems. Her internal organs were shutting down and her bone marrow production had slowed to almost a stop, leaving the infant at a high risk for internal bleeding. But the first sign that God was at work? Doctors told the parents that had Gemma waited just three more hours to come to the hospital, baby Skye would have died in her womb. While they didn't know what was wrong with her, she at least now stood a chance.

Doctors worked diligently trying to help little Skye, but no one could figure out what was wrong. After just a few hours, they held out no hope for the baby's survival. The hospital chaplain was brought in to say prayers, and Gemma and Craig were told to take pictures of their baby girl before it was too late. Family members flocked to the hospital to say goodbye to the little girl that had only just arrived.

But God was not done! Doctors managed to stabilize Skye enough to try to transport her to another hospital for one last attempt at saving her life. Baby Skye took to the sky, and was airlifted 170 miles to another hospital for specialized care. The poor parents, unsure of whether their daughter would even survive the trip, had no choice but to follow by car. Gemma says,

"[Skye] was wide-eyed and looked scared. But she always knew who her mum and dad were."

God proved again He had bigger plans for this girl, and Skye indeed survived the trip. Once at the new hospital, the sweet girl that had only been alive for 36-hours was put into a medically induced coma. It was then that Gemma was able to hold her baby for the first time.

Skye was kept in a coma for two days, and on a ventilator for a week in the neonatal intensive care unit, while doctors worked tirelessly to try to save her. She was eventually transferred back to the hospital where she was born, but her body just continued to shut down. Doctors ran every test possible, but no one could find a cause for the baby's suffering.

Meanwhile, the poor parents were left to play the agonizing waiting game. Her distraught mom was given a lock of Skye's hair, which she kept in a tube. Gemma took a teddy bear, a gift that had been given to her for Skye, ripped it open, and put the lock of hair inside the stuffed animal. Each night she would sleep with the teddy bear hugged tightly against her heart.

To help her cope with all that was going on, Gemma also set up a Facebook page to report on her daughter's progress. It was flooded with words of encouragement and prayers for healing. A fundraising page was also established to raise donations for the Ronald McDonald House, where the parents had stayed during the ordeal.

It turns out these acts offered Gemma just the support she needed during this difficult time. She says,

"Social media helped me a lot because it made me feel like I was not alone. Everyone was praying for her and lighting candles and it helped lift my mood."

But as the days ticked by, God proved he could do the impossible. Skye started to get better!

After five platelet transfusions and two blood transfusions, Skye's bone marrow started behaving just as it supposed to! And Skye has since made a full recovery, that the doctors still can't explain. But it sounds to me like Gemma has figured it out:

"I've never been a believer in miracles, but Skye genuinely is a miracle. Now every day we are looking at a miracle. She's still here and to be well and making a full recovery is just astonishing."

Our God is an awesome God! Amen?

h/t: The Press And Journal