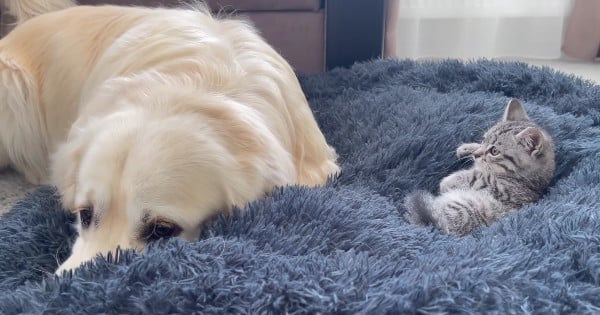 The cutest little newborn Nigerian Dwarf Goat just wanted to make some friends with the other baby animals. The barn kitties were a little more skeptical about the 2-day-old goat. Watch the goofy baby goat climb and hop all over to impress the kittens!

After living on the earth for less than 48 hours, Hector the newborn Nigerian Dwarf Goat already wanted to make some friends of his own. Luckily, the orange barn kittens seemed as good an option as any - and they even look like him!

RELATED: Pit Bull And Deer Play Together And Their Unlikely Friendship Is The Sweetest Thing

Confidently walking and wagging his stumpy tail, Hector slowly approached one of the kittens to investigate. The kitten didn't seem too intrigued by Hector's existence, but the two had their faces only a couple of apart and sniffed each other.

Making Friends On The Farm

Longing to fit in, the newborn Nigerian Dwarf Goat tried his hardest to use his brand new legs to hoist himself onto the bags of woodchips where the kittens were sitting. Since the bags sat as high as his chin, he struggled to pull himself up. Poor Hector!

Even if he felt discouraged, his tail didn't show it. His adorable nub kept wagging through the entire process!

One of the kittens appeared mildly displeased with how close Hector was getting. She moved over to get away, giving Hector more room to squirm onto the platform.

RELATED: Toddler Shares Her Milk With The Baby Goat At A Petting Zoo

Eventually, the newborn Nigerian Dwarf Goat successfully pulled himself up and sat amongst his new pals. But the three of them just stared. Maybe they were impressed with his determination!

He explored his new view of the world and ended up scaring the kittens. Confused but still hopping along, Hector considered the leap to the ground. Nothing stops him! He took the leap of faith with his little legs and stuck the landing! Doesn't even wobble - very impressive!

After all that playtime, Hector needed to recharge and got a snack from his momma goat. Momma didn't appreciate one of the kittens playing with the stall door and almost hitting her only baby.

You May Also Like: Man Scans The Water For His Fur-Baby And Then Watches In Awe As Dog Saves A Fawn

Baby Hector and his momma later shared some time together in the grass, and he probably realized that his first and best friend was his momma!