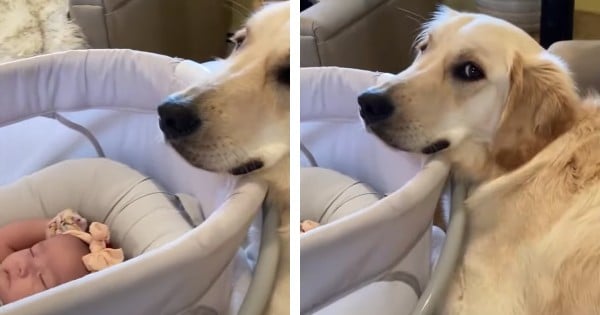 In this positive news story, a dog saves a fawn from drowning in an incredible display of animal compassion!

One evening, a man couldn't find his dog after letting him outside. Eventually, he spotted his dog trying to save a fawn in the middle of the lake on his property. Harley the Goldendoodle knew there wasn't time to waste when he saw the deer stranded in the water.

RELATED: Scared Child Was Drowning But God Put a Furry Angel in the Right Place at the Right Time

Ralph Dorn said he had no clue how the baby deer ended up so far in the water but that "Harley obviously didn’t ask why, he just jumped into action."

This selfless heroic dog probably thought of nothing but saving the baby fawn in danger.

Harley swam next to the fawn, directing it toward the shore for almost 200 feet. Ralph had to help the fawn up and out of the lake to get it fully on land. His rescue dog never left their side.As soon as the baby had its hooves on land, Harley began licking it to dry it off.

While Harley had the situation under control, Ralph pulled out his phone to take pictures of the rescue mission. After he knew the animals were safe, he shared the story and pictures of his dog saving a fawn on Facebook.

People loved the story and shared the post over 250,000 times! Sweet Harley has no idea how many people know him as a hero. This dog has a natural instinct to love and care for others — animal or human!

"Harley didn’t want to leave the fawn. He just kept interacting with it, licking it, caring for it," Ralph said.

RELATED: 4-Year-Old Goes Outside To Play And Then Mom Spots The Boy With A Deer

He also shared that his kind-hearted pooch is a trained therapy dog. Harley regularly visits nursing homes and even likes to hang out with kids at the library!

The mama deer showed up once her baby was safe, and Ralph took Harley back inside to give them some space. But Harley didn't forget about the fawn.

The next morning, Ralph said that Harley was pacing and looking out the windows. He let the pup out and could hear what had him so unhinged... the baby was crying somewhere!

Harley quickly found the baby to check on it and returned home. The baby stopped crying, and the dog relaxed knowing his new buddy was okay. The mama deer returned again, and they eventually left.

Bragging about his lovable pooch, Ralph said, "We could tell right away, even as a puppy, he had such a good heart."

You May Also Like: Dog Barked Non-Stop At Biker Until He Followed And Saw A Brown Towel That Was Wriggling

A good boy with a good heart. Let's hope he got a bunch of treats after!