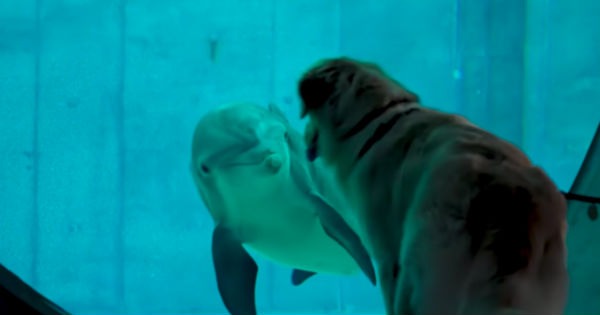 Two beluga whales were captured as babies and kept in captivity for years. But now, thanks to some determined rescuers, Little White and Little Grey are experiencing the ocean for the first time in their adult lives!

Most people wonder if animals have feelings and if they do, can they express what they feel the same way? Look no further than the big, toothy smiles on these whales, Little White and Little Grey.

RELATED: Orangutan Lost His Arms While Escaping Captivity But Has Such An Inspiring Comeback Story

Their smiles are proof! Especially since they seemed to know they were being freed from their former lives in captivity.

The stunning pair of beluga whales have returned to outdoor life after a 6,000 miles arduous trek back to the wild. The journey also included a ride on a Boeing 747 400ERF aircraft and harbor tugboat before being lowered into an outdoor tank that is connected to their forever home-the ocean. The animals instinctively knew they were being helped. It seemed as if they knew they were returning to their roots despite all the different ways they had traveled so far.

The moving of the whales into the first open water sanctuary was completed on Friday, August 7th. Here, after acclimating to sea life, they will be released into a 32,000 square mile sanctuary off the coast of Iceland.

Captured as mere babies, the two beluga whales spent their lives performing tricks for treats in an aquarium in Shanghai for more than a decade. Rob Lott, Whale Dolphin Conservation Campaigner said, "Little White and Little Grey were taken from the wild when they were very young so Friday was a big day for them (and all of us) as they got to experience the ocean for the first time in their adult lives.”

As they lowered the pair into the water, the smell of the salt in the air and the water below excited them. Their fins waved, their tales whipped, and they dived deep into the waters as their rescuers breathed a sigh of relief, said a little prayer, and gathered for a large group hug.

"It's kind of the finish line for these two, but it's a new chapter for belugas around the world," explained Audrey Padgett, Sea Life Trust's general manager.

What an inspiring story of restoring God's creation! Thank God for people who have a passion for our cetacean friends.

YOU MAY ALSO LIKE: Humpback Whales Crash Breakfast At Lodge

"So God created the great sea creatures and every living creature that moves, with which the waters swarm, according to their kinds, and every winged bird according to its kind. And God saw that it was good," Genesis 1:21.