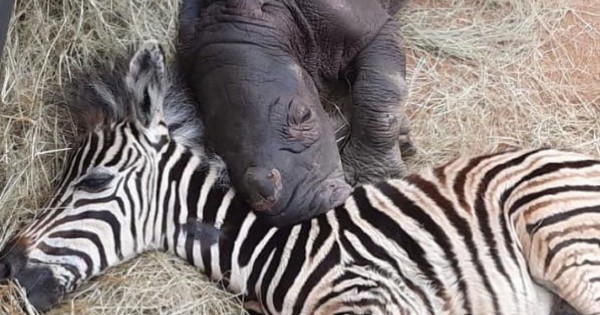 Rescued Newborn Rhino Gets Round the Clock Care, And Support From an Unlikely Zebra Friend
Read Article »

In this positive news story, a beagle rescued an 85-year-old woman. And Milo’s heroic deed just reminds us what a gift our pets truly are!

If you're blessed to have a four-legged furry companion then you know just how amazing dogs are. And while Milo may not be related to Lassie, he did display courage and determination.

Makayla Swift, the dog mom of this story, was taking Milo for a walk when he shot off the front porch on a dead run to a neighbor’s house. She didn't know why her rescued beagle took off until later when she heard a faint voice cry for ‘help.'

At first, Makayla thought he had found a squirrel or some other animal that captivated his attention. When she caught up with her new adopted furball, she found him barking and scratching at a neighbor's front door.

Makayla beckoned him to come back to her and tried enticing him to go for a walk. But Milo insisted she listen to what he was trying to communicate.

"I couldn't catch him... He started scratching on the front door," Makayla said. "I'm thinking, ‘Why is he literally trying to break into her house?'"

Milo, an adopted Silver Spring dog, is being credited with saving the life of an 85-year-old woman who had fallen, hit her head and become trapped. https://t.co/n3uQQmderJ

Then, she heard a faint cry coming from inside the home. She then realized her dog knew that someone in the home needed help.

Beagle Rescued A Neighbor In Need

The cry came from Sherry Starr, an 85-year-old woman. Sherry had fallen and gotten stuck between the tub and toilet. She slipped and couldn't get back on her feet. Panic sunk in as she wondered if she might possibly die there. She lived alone and couldn't reach her phone.

"All of a sudden, standing there between the toilet and the tub, I slipped. I went down - hard - on the tile floor." She added, "I could not move at all. I'm thinking: I'm just going to die here."

But God sent Sherry a big miracle through little Milo. The beagle rescued her by leading his human straight to her front door. And after Makayla heard Sherry's cries for help, she called 9-1-1.

Minutes later, paramedics arrived to get Sherry back on her feet. When she finally had a chance to meet the ones who heard her cry for help, she couldn't help but call Milo a hero. Meanwhile, his owner calls him a blessing. I guess you could say he's a blessed miracle.

We can thank God Sherry is recovering from her fall and we can certainly thank God for creating furry companions who are everyday heroes.

Thank you Milo for jumping into action and for refusing to give up until you saved the day!

YOU MAY ALSO LIKE: Mail Carrier Saves 94-Year-Old Woman Who Fell in Her Secluded Home

WATCH: Her Rescued Beagle Took Off, Then She Heard A Faint Voice Cry, ‘Help’