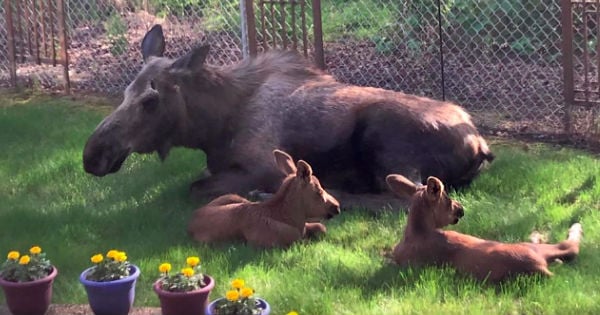 When Scott Bixby spotted a bear in a tree going to town on his birdfeeder, he wasted no time jumping into action. He ran onto the deck, scolding the bear as if it were a naughty puppy. And his hilarious method left the Internet seriously impressed!

Scott Bixby of Colorado looked out the window one day to see a bear in a tree. The furry beast had spotted the birdfeeder and was in the process of helping himself to a snack.

RELATED: 2 Bears Stealing Honey Get Caught In The Act And Farmer Cleverly Turns Them Into Taste Testers

But not for long. Scott quickly rushed outside and corrected the bear as if it were a misbehaving puppy!

Scott bursts onto the porch, clapping his hands and shouting commands like “No!” and “Stop it!” at the bear. And by golly, it works!

At first, the bear responds by retreating slightly back down the tree. Then, he stares at Scott, seemingly confused and even a bit intrigued.

Next, the bear starts inching his way back toward the birdfeeder. But Scott immediately goes back into “bear training” mode, shouting “No!” and “Down!” while snapping, clapping, and pointing.

To everyone’s amazement (including Scott’s!), the bear obeys and heads back down the tree.

WATCH: Man Scolds Bear In A Tree Like A Puppy

Update: The bear is now asleep at the base of the tree and has been named Teddy Graham. https://t.co/Xlpjoq69ob

Scott shared his video of the incredible encounter on social media and the reaction was astounding. Folks from all over were majorly impressed that Scott’s “bad dog” voice proved effective against a wild bear in a tree.

"They're honestly dog-like,” Scott replied to one commenter. “Like, his face looked like my dog's when he gets into the trash.”

Most found Scott’s interaction with the bear very entertaining.

“This made my day,” one person wrote.

“This is the hardest I’ve laughed since quarantine started. Shoutout to all humans and bears involved,” wrote another.

Others offered advice on how to “bear-proof” the birdfeeder, some of which were pretty hilarious:

You can distract them with picnic baskets. pic.twitter.com/x7tcthL5yG

Get yourself a guard cat. pic.twitter.com/7IqRCPbbso

Dress up like a park ranger, put your hands on your hips and say “Yogiiiiiiiii!” If that works, congrats. If it doesn’t congrats on the viral video of a bear eating you.

Have the bear’s mother-in-law comment on the bear’s weight any time it approaches the birdfeeder.

Ultimately, Scott Bixby opted to follow the most common advice, which was to remove the birdfeeder entirely.

Update: Taking down the birdfeeder for now, per the advice of a lot plenty of people with unexpected ursine knowledge (e.g., @MiaFarrow).

We love Teddy Graham too much to get him in trouble with the Bear Patrol. pic.twitter.com/WqombqK9cr

At least Scott will always have his now-viral video to remember the bear in a tree, along with an incredible story to share.

And while taking on a wild animal isn’t usually a good idea, thankfully no one got hurt during this encounter… well, except maybe the bear’s pride!