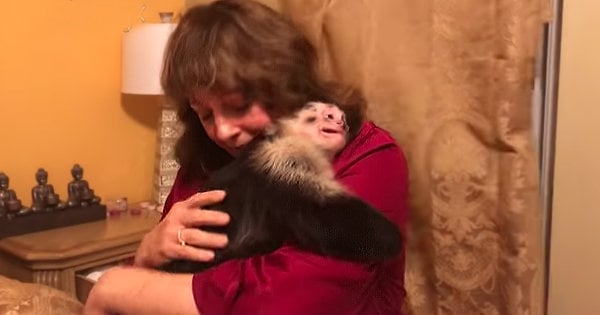 Adorable Monkeys Get So Excited When Their Grandma Visits
Read Article »

As the neighbor’s dog chased a bear right out of the backyard, Mark Stinziano’s home security cameras were rolling. And it’s no wonder the jaw-dropping footage of this fearless pup is going viral!

Mark Stinziano, who lives in a wooded area in New Jersey, learned that his family had a special guardian angel watching over them. This furry, 4-legged angel is Riley, the black Lab mix who lives next door.

Before the dog chased a bear out of the year, Mark already knew Riley kept an eye on the family.

“The dog usually pops over to check on my four kids," he said. "They like him and get along well with him too."

But Mark’s security cameras soon revealed the dog was fearless when it came to protecting his favorite neighbors!

When Mark’s daughter heard a noise outside, her dad decided to take a look. He found the bird feeder on the ground and wondered what could have knocked it over. That’s when he decided to check the security footage.

If it weren’t for the home surveillance cameras, Mark Stinziano and his family would have no clue what Riley did for them. Amazingly, the cameras showed a hungry bear wandering into Mark’s backyard.

The small bear momentarily hit the jackpot after knocking the bird feeder over. But

When Riley noticed an intruder in his neighbor’s yard, he jumped into action. Tearing into the yard, the fearless dog chased the bear away!

Since sharing the footage online, Mark’s video of Riley coming to the rescue has gone viral.

YOU MAY ALSO LIKE: Baboons Swimming In Family's Pool Get Busted By Security Cameras

Meanwhile, Mark is just glad to know he and his family have an extra layer of protection. He’s promised to reward the pup with a steak dinner.

Aren’t God’s creatures amazing? He sure knew what He was doing when He gave us dogs as companions!

WATCH: Story Of Dog Who Chased Away A Bear