Removing mistreated animals from their harmful environments is the first step in an animal rescue. And adopting these animals into a new, loving home is the happy ending. But this emotional video where a rescued dog learns to trust human touch shows there’s lots more work that goes on in between.

God expects us to show love and kindness to all of His creations. Sadly, though, not all animals get the love and respect they deserve from their owners. And that’s where the noble work of animal rescue groups comes in.

Dogs Deserve Better Good Newz Rehab Center in Smithfield, VA is an organization dedicated to change. They rescue and rehabilitate abused and neglected dogs, transforming them into loveable family pets.

Many of the dogs that come to Dogs Deserve Better have never experienced real love. Their humans have either tied them up on a chain or locked them away in pens. There, the dogs are neglected and abused, year after year.

When these poor creatures are finally rescued, they don’t know they’re being saved. Strangers come and put them in a van and ship them off to a strange place where they are poked and prodded with medical instruments.

Oftentimes, the evil we know feels “safer” than the unknown and it’s no different for animals. Even though the rescue for their own good, these poor dogs don’t know it. All of this change can be traumatizing.

“Life seems to be getting better but you have no clue what love and compassion feel like so you are terrified and withdrawn,” explained a volunteer from Dogs Deserve Better.

This is where staff and volunteers at animal rescue organizations come in. They show these poor, mistreated creatures the love of Jesus. And an unnamed volunteer from Dogs Deserve Better wanted to share her first encounter with a new shelter resident, Bernard, so everyone could get a behind-the-scenes glimpse of the amazing work these unsung heroes do.

Staff warned the woman who volunteered she’d be facing some great challenges with Bernard. But the compassionate woman didn’t mind.

When she met Bernard, he was cowering inside of the crate with no interest in coming out to discover his new home. The woman recognized Bernard felt safe in the crate. So, she decided it would be better to leave him inside and remove the top, rather than dragging him out.

Bernard immediately jumped out and hid behind another crate. But the volunteer patiently inched closer and gently touched him with her hand. 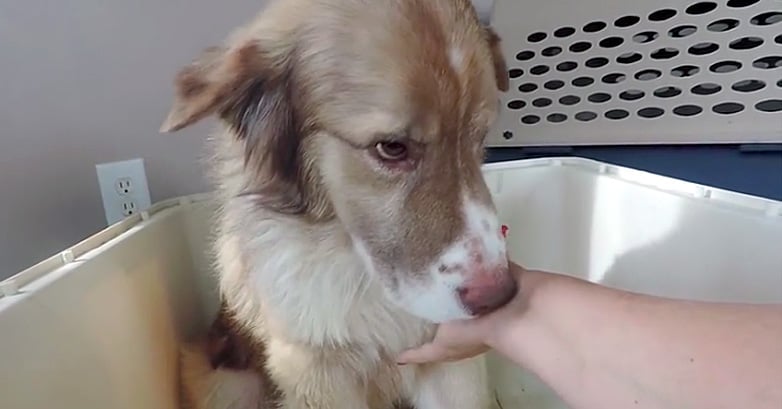 He eventually moved back into the bottom of the crate and the kind woman spent 45 minutes sitting patiently with Bernard, showing him the love he’d never experienced.

“I decided to turn the camera on so that you all could witness the beginning stage of his recovery process,” the volunteer shared. “My only goal for the day was to let him know that human touch was safe. I was honored and humbled when he moved toward my hand at the end.”

Through the woman’s tender and patient visit, the rescued dog learns to trust human touch. And that’s a huge step toward his transformation!

The emotional video of Bernard drew loads of attention online. Plenty of folks wanted to give him the loving forever home he deserves. In fact, one woman named Katie who lived in Washington state was prepared to find a way to transport Bernard all the way across the country!

After a rehabilitation period where the shelter gave Bernard medical attention, socialization, and lots of love, he was finally ready for adoption. While Bernard’s fan from Washington wasn’t able to adopt him (a local woman came forward to adopt him), Katie was just happy to see him get a loving home. And she shipped a bundle of goodies to the Dogs Deserve Better shelter, just for him.

We’re so thankful for God’s earth angels who take care of his furry angels! And remember, even if you can’t adopt, you can support these animals in other ways including volunteering your time at the shelter or donating supplies.

“The righteous care for the needs of their animals, but the kindest acts of the wicked are cruel.” Proverbs 12:10

YOU MAY ALSO LIKE: Dog Falls Out of Plane And Survives After Wandering Desert for Days