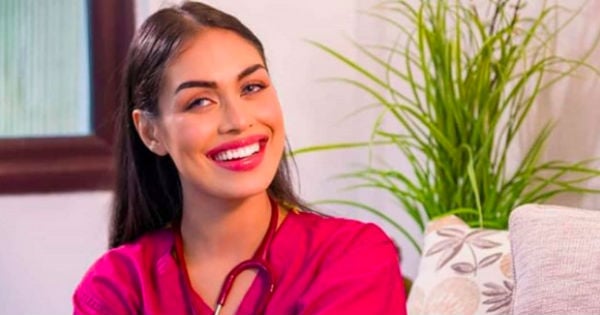 When a single dad’s card was declined repeatedly at the grocery store, God told Sara Fleming to cover it. And what God did next was truly amazing. So now, Sara is sharing her true short story so others can hear of God’s goodness.

Mommy blogger and “Jesus girl” Sara Fleming just loves sharing true stories of seeing God at work. And an encounter she had with a stranger at the grocery store made for an especially inspiring and uplifting post on her Facebook page, Pacis In The Gutter.

While standing in the checkout line one night, the man in front of her ran into a problem — his card was declined.

The man was at the store with his two children and Sara guessed him to be a single dad. She later found out her assumption was correct. And after the cashier finished ringing up the man’s groceries, it appeared as though he didn’t have enough to pay the $94.10 tab.

The dad swiped again and again. But each time his card was declined. All while his children stood by his side.

“The girl was a pre-teen, and the boy was about my son's age,” Sara recalls. “I could see the embarrassment written all over their faces.”

And that’s when Sara felt the first nudge from the Holy Spirit.

“It was like a gentle shove on the back and a mild electric shock to my heart,” she said. “Pay for these groceries.”

Act Of Kindness After Card Was Declined

While Sara wanted to help, things were pretty tight for her family-of-four, too. They’d had to leave their home of 10 years behind, along with 98% of their belongings, due to toxic mold.

But God had always provided for them. And now He was asking her to do the same for someone else.

“It doesn't matter if you don't have the money...I'll provide. Trust Me,” Sara recalls hearing God say as she mulled over what to do.

And so, Sara Fleming stepped up and told the cashier she’d cover the bill for the man who’s card was declined.

“I look at the dad. He's crying now,” Sara said. “His daughter is hugging him. Then I pay for my things as well. Praying God would cover it (He did).”

The experience was deeply moving for both Sara and the single dad. And just this simple exchange would have been enough to make a wonderful, inspirational story.

A Surprise At Church

A few months later, Sara Fleming was a church with her family. They’d just finished worship when Sara spotted something unbelievable.

“I look to my left, and my stomach literally plummets to the ground,” she says. “Then my heart begins to race.”

At the end of the row where she and her family were seated was the same single dad who’s card was declined, along with his kids.

“I never told him I was a Christian — I never even told him where I went to church,” Sara explains on Facebook. “I just obeyed God. The same One who brought this dad and his family to my church that Sunday. It's not about me. Glory to the Lord God Almighty, great things HE hath done.”

Be sure to read Sara Fleming’s full story on Facebook at Pacis In The Gutter.

YOU MAY ALSO LIKE: Single Dad Leaves Tip For Waitress Who Stood Out For A Special Reason

What an incredible reminder that God doesn’t ask us to have it all figured out. He’ll take care of it all. He asks only that we remain obedient and trust Him!