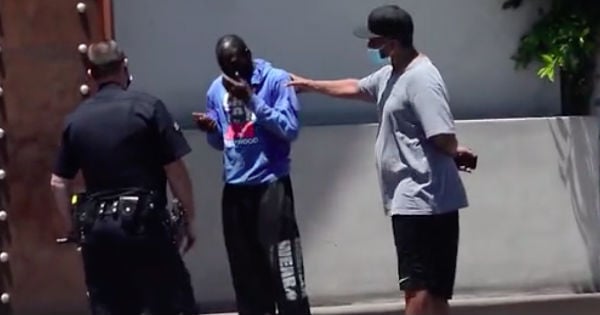 Denzel Washington, Christian Celebrity, Is In The News For Helping Homeless Man In Danger
Read Article »

The entire Chip and Joanna Gaines family joined Emmanuel Acho to discuss racial injustice in his video series, Uncomfortable Conversations with a Black Man. And their powerful conversation aimed at improving the world for future generations is truly inspiring!

Emmanuel Acho is a FOX Sports analyst and former NFL player. And in the Summer of 2020, he began hosting a social media video series, Uncomfortable Conversations with a Black Man.

The idea behind the series is to provide a safe place to have the tough, sometimes uncomfortable conversations about race relations. The types of conversations needed to foster compassion and healing. And with the goal of bringing all of God’s children together in mutual respect and harmony.

“I realized I could stand in the gap and bridge the gap and communicate the message that my black friends have to my white brothers and sisters who can help alleviate our problem in society,” he explained. “I felt called, I felt commissioned to deliver the message.”

Chip And Joanna Gaines Join The Conversation For Unity

Emmanuel’s first video resonated deeply and took off. Next came a conversation with Matthew McConaughey. And after that, Chip and Joanna Gaines joined in with their entire family.

It can be challenging for parents to know just how to address racial turmoil with their kids. And that’s why Chip and Joanna Gaines decided to include their entire family in an “uncomfortable conversation” with Emmanuel Acho.

When the couple first heard Emmanuel’s message, it hit hard.

“When I saw your video… I mean, bottom line, our family wants to hear what you have to say,” Chip explained.

Chip went on later to expand upon his response to Emmanuel’s original Uncomfortable Conversation with a Black Man video. He said it was an eye- and heart-opening moment for him.

“Something about your video… was almost like that light bulb moment,” he said.

Taking The Time To Listen

Though racial injustice may not be something the Chip and Joanna Gaines family have experienced firsthand, they’ve recognized their responsibility in helping end it. And that starts with becoming more educated by those who’ve suffered from injustice.

RELATED: Mom Left Speechless Over Unjust Tragedy But God Gave Her These Powerful Words: ‘I Am Mama'

Chip went on to explain how cancer hadn’t directly impacted anyone in his family. Yet, when he met a woman battling the disease and she shared her story with him, he and Joanna began to immerse themselves more in helping the victims of cancer. Chip and Joanna Gaines ended up speaking out and becoming big cancer advocates.

“I don’t have a whole lot of personal experience with cancer and the challenges that people face in that way. But I’m telling you, once I learned about it and understood it and it affected my soul — I couldn’t unforget it,” Chip said. “And when I saw your video, I couldn’t unforget it… It was like a light bulb went off in my head and I was like, ‘I think I’ve been blind to this reality for maybe my whole life.'”

And that’s why including the whole family in a candid and potentially uncomfortable conversation was so important to Chip and Joanna Gaines.

Both the Gaines family and Emmanuel Acho have a desire for a better future for this country. And the conversation they had was truly powerful and inspiring.

“Do we still have a long way to go? No doubt about it. But I am hopeful to a degree because of this — because of interactions like this. And more importantly, because of you all,” Emmanuel said, gesturing toward the Chip and Joanna Gaines kids.

God has given Emmanuel an incredible gift for taking complicated, sensitive topics related to race and breaking them down using relatable analogies. And now he’s helping facilitate tough conversations in the hopes of positive change. And true change will take all of us, working together for His will.

YOU MAY ALSO LIKE: By The Time ‘Fixer Upper' Ended, Joanna & Chip Gaines Admit They Were Desperate To Step Out

“Learn to do well. Seek justice. Relieve the oppressed. Judge the fatherless. Plead for the widow.” Isaiah 1:17