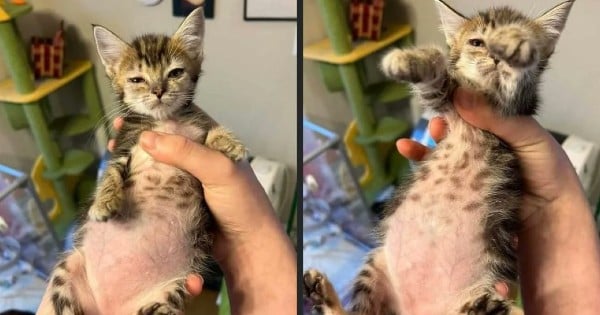 This sweet, precious puppy lived in a bubble in order to survive. But then, one day, she got out. And what happened next is a miracle!

A puppy in dire need of life-saving help came to Kathryn because she couldn't breathe. But Kathyrn had just the thing to help little Sally survive. She affectionately calls it "the bubble." In reality, it is a plastic chamber that is much like an incubator for newborns.

Sally came to Kathryn unable to breathe, sick with pneumonia, and likely aspirated milk into her lungs when she was nursing on her mama. Kathryn remembers the first time meeting Sally, and she was alarmed because the sweet puppy was blue and gasping for air.

She immediately put Sally inside the bubble and got the oxygen flowing. Within thirty minutes, Sally was calm and breathing, but that's when Kathryn realized Sally was “completely oxygen dependent” and was unable to breathe on her own at all.

But that didn't stop Kathryn from trying to save Sally's life. Sally deserved a shot at living. So, Sally lived in the bubble. For the first few weeks, Kathryn kept the puppy in there and even took Sally with her wherever she went–even to work at a vet clinic.

RELATED: Dog Dragging Back Legs Crawls Right Up To Workers Who Rally To Help Her Live Her Best Life

"She was just our little bubble girl," Kathryn said.

Slowly, Sally began to improve and became a very curious and active puppy. Though she lived in the bubble to survive, she wanted to see what life was like on the outside of her chamber.

Puppy Lived In Bubble Until She Decided She Wanted Out

Kathryn began working with Sally's curiosity in order to build her lungs. At first, Sally was out of the bubble for a mere thirty seconds before she was gasping for air. But over the weeks of her short little life, her lungs grew stronger so she could stay out for up to thirty minutes.

When she began gasping for air, Sally instinctively knew she needed to get back into the chamber in order to breathe!

Kathryn knew the active pup couldn’t live in a bubble forever. She prayed her lungs would improve and continued to let Sally out to play and explore the world around her.

But then, one day, something incredible happened. The dog who lived in a bubble pawed to get out and never went back in!

Sally made it through the whole day without needing extra oxygen. It was an absolute miracle.

By that point, Kathryn knew Sally was ready to find her forever home. The sweetest part of this story is that Kathryn gets to see Sally whenever she wants because Bonnie, her friend, and coworker, adopted Sally.

Bonnie had witnessed the entire journey of the pup who lived in a bubble, and she couldn't help but be drawn to this little fighter. Now Sally has a forever home with lots of siblings and all the air in the world to breathe. May this incredible story remind you that every breath we take is a gift from our heavenly father.

YOU MAY ALSO LIKE: He Was Nothing But Skin And Bones When They Found Him But Dog's Transformation Is Amazing

"The Spirit of God has made me, and the breath of the Almighty gives me life," Job 33:4.

WATCH: Bubble Puppy Breaks Out And Amazes All