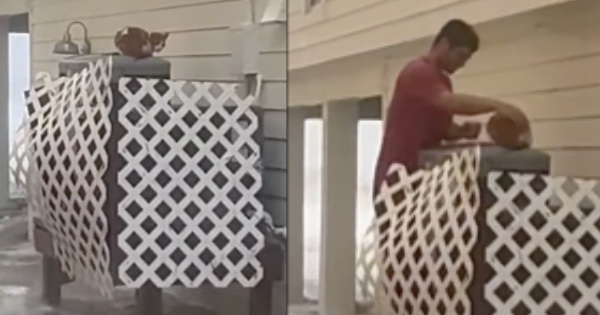 As Flood Waters Surge All Around, Kind Man Goes Out Of His Way To Rescue A Stranded Cat
Read Article »

One cat named Cheesecake had everyone at the vet laughing at her most recent visit. And you'll see why after you hear the veterinarian's diagnosis.

RELATED: Man Stopped And Thought He Was Rescuing A Kitten But Then He Found Himself Surrounded

Haley Andrews recently shared on Facebook about a recent vet visit that she had with Cheesecake, a little kitten that she has been fostering.

“I’ve been very worried about Cheesecake lately, because she is so bulbous,” Haley wrote on Facebook. “I was worried about worms, or worse, fluid build up from FIP."

She continued: “They ran some tests. Looked for fluid. I was a stricken with anxiety, heart racing. Untreated FIP is usually fatal to kittens and losing Cheesecake would be too much. The vet comes back into my room and hands me my carrier with Cheesecake back in it. Her face doesn’t indicate much. She looks at me. I look at her. I’m terrified.”

Vet’s Diagnosis For Cat Named Cheesecake Has Everyone Laughing

What a hilarious answer and a relief to Haley! After fostering hundreds of kittens over the years, Haley knows what to look out for when a kitten may be sick. So Cheesecake's bigger belly was worrisome to her at first.

“I was really nervous that Cheesecake had FIP. I had a couple of kittens pass away from it last year and sometimes a sign can be bloating or fluid buildup around the tummy. So, I let my anxiety get the best of me and I rushed her to the vet,” said Haley.

“I truly was really nervous the whole time at the vet, but I know her personally (she works with me through the foster organization) and when she told me that she was just fat, we both had a laugh and I felt super relieved."

And Haley also shared that it is actually a good sign that Cheesecake is on the bigger size for being a rescue kitten.

“In rescue, a chubby kitten is a healthy kitten, because they require so much food just to grow and be healthy," said Haley "But Cheesecake was being a little too glutinous."

YOU MAY ALSO LIKE: As Flood Waters Surge All Around, Kind Man Goes Out Of His Way To Rescue A Stranded Cat

Thank goodness this kitten is just a tad cubby and has no health issues. And God bless Hannah for fostering the little cutie!