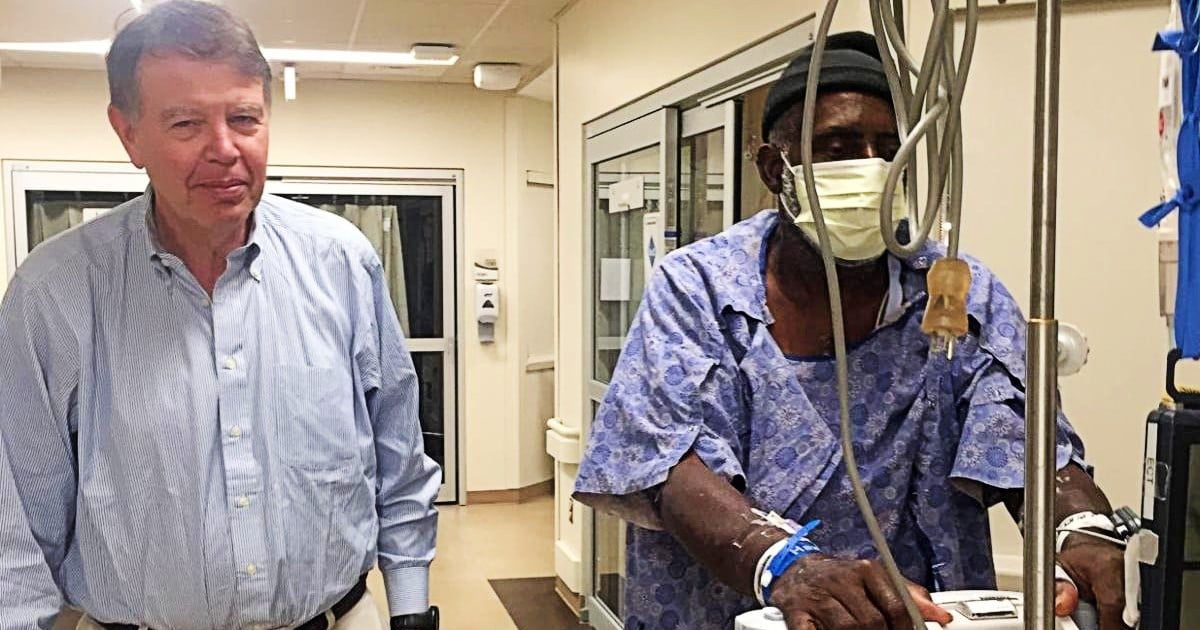 Angie Flanary’s son, Jason Stunson, desperately needed a donor for a kidney transplant. But finding the right match can take quite a bit of time. But for this family, the perfect donor miraculously showed up on their doorstep!

Jason Stunson was born with congenital nephrotic syndrome. It’s a condition causing the kidneys to fail during early childhood.

Because of this disease, life has been a battle for Jason. The young man has already endured multiple surgeries, the removal of both kidneys, dialysis, and a kidney transplant in 2004.

Jason’s mom, Angie Flanary, was the donor for his kidney transplant the first time. But a later battle with a brain tumor left Jason Stunson in need of yet another transplant.

Significant health battles like these would make it easy to give up. But thankfully, this family knows their Heavenly Father is holding Jason in His hands. And they soon discovered God had already provided the answer to their prayers!

In Need Of A Miracle

Angie started the Jason Stunson Caring Bridge page several years back so she could journal about her son’s health journey. Her hope was for the journal to show her son what an inspirational overcomer he truly is.

“I pray that he finds strength in times that he feels defeated,” Angie Flanary wrote. “Maybe in the process he can help someone else who may find themselves struggling or needing encouragement.”

And a miraculous story this mom shared here and on social media is certainly encouraging and inspiring folks all over.

Insurmountable odds are the best recipe for God’s miracles. And things were certainly looking grim as Jason’s health took a turn for the worst.

As he headed back into dialysis, Jason’s family urgently sought a donor for another kidney transplant.

As any loving parent knows, watching your child suffer is pure torture. So, in addition to asking for prayers, Angie Flanary also posted a desperate plea on social media, begging people to get tested to see if they could be a possible donor match.

Prayers To Find A Donor For Kidney Transplant

Angie’s post caught the attention of Taylor, her “oldest bonus babe” from another relationship. Even though Taylor was serving in the military thousands of miles away, she just knew God had chosen her to help.

RELATED: Dying Woman Puts A Message In A Bottle Pleading For Help And It Saved Her Life

“She said she was going to get tested because she knew in her heart and soul that she was (my son) Jason's match,” Angie Flanary explained. “She felt this overwhelming peace that God was going to heal Jason and show this miracle through her!”

Within 24 hours, Taylor had approval from her commanding officer to go home and get tested as a viable donor for the kidney transplant.

Doctors doubted Taylor would make a good candidate, even after she passed the initial blood tests. They feared the size difference between the two siblings was just too great.

With Jason at Jason 6'2" and 225 pounds and Taylor at 5’1” and only slightly over 100 pounds, they worried Taylor’s kidney would be too small to function properly in Jason’s body. But for Taylor, becoming her brother’s donor for the kidney transplant was always a certainty, never an “if”. So, she took the doctors concerns straight to God!

“If the only thing that could hold her back from donating was her size, she was determined and convinced that God would zap those kidneys and make them huge,” Angie explains.

Angie was stressed out and in the middle of packing when “God revealed His plan.” A knock at the door revealed Taylor, holding a cake and flashing “the most beautiful smile that was so full of love.”

“I knew right then she was it,” Angie says.

The cake Taylor was holding read, “I love you with my whole kidney.” And she was there with the miraculous news that she was the perfect donor for Jason’s kidney transplant!

And God made it clear this was not by chance.

Taylor received a call from the transplant coordinator, Annie. Annie explained that an average woman's kidney is around 150cc and an average man is around 200cc. Amazingly, despite Taylor’s tiny frame, her kidney is 200cc.

“Now you tell me that this is not a miracle!” Angie Flanary exclaimed.

The grateful mom turned to social media to praise God and share this miraculous story.

“Saying, ‘God is good,’ is an understatement. He deserves so much more praise than that,” she says.

In the upcoming weeks, Taylor and Jason will be going into surgery so this big sister can donate her kidney to save her little brother. So, please keep them and the entire family in your prayers.

But Angie is sharing this miracle story as much as she can as a reminder of God’s greatness. He always gives us just what we need. We can’t always see it at the time, but God always has us right where we’re supposed to be!