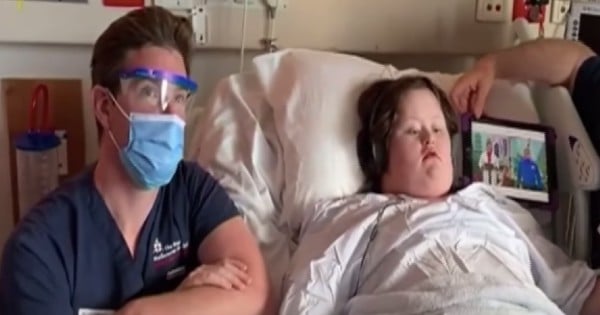 The Praynksters gift a dream wedding to Kristianna, a young woman who was never adopted and has worked hard to overcome so much.

The "Praynksters" are a group of Good Samaritans who spread kindness through humor. And in this video, the group brings us a real tear-jerker.

RELATED: Community Rallies To Plan A Dream Wedding For A Woman With Little Time

Jeffrey Agosta is the man behind the "Praynksters" celebration, and it's an awesome display of generosity for a woman who has been given very little along the way.

As the video opens, Kristianna thinks she is being interviewed for a documentary. She has no idea this is really about her dream wedding.

Kristianna shares pieces of her painful past, describing the abuse that started when she was 4 years old. Kristianna suffered broken bones and a concussion, moving in and out of foster care. But, it is heartbreaking to hear her tell about the loss of her best friend.

After being at a sleepover at Kristianna's home and witnessing Kristianna's enraged father beat and abuse her, Kristianna's friend shared the horrible story with her own parents. She was never allowed to go to Kristianna's house again. That must have been a tremendous blow for Kristianna, having so few people in her life to count on for support and encouragement.

Kristianna appears frail and a bit timid, but this girl is one strong chick. In spite of the chaos in her young life, she's done amazing things. Kristianna has held two or three jobs simultaneously since becoming old enough to work. She's helped care for her siblings while working and going to school. She earned a 4.2 g.p.a. in high school and didn't stop there.

Kristianna went on to college and became a Respiratory Therapist. And, she helped author the "Foster Care in Youth Bill of Rights." How appropriate for her to lend her voice to such an important document!

Here's where Jeff comes into the picture with her dream wedding.

Dream Wedding For An Inspirational Overcomer

Kristianna's final response pertains to her upcoming wedding and the challenges of paying for it. She's not able to create the day she's dreamed of, because she has limited funds.

Jeff explains that she's not really there for an interview. Instead, she's there, because a lot of folks have come together to provide her with her dream wedding. Businesses are gifting Kristianna with bridal make-up, catering, a wedding cake, marriage counseling, a honeymoon, and more! Jeff hugs Kristianna and assures her, "Because you're the most deserving person we could have found. You 100% deserve this."

The shower does not end there. Kristianna is greeted by a room full of people with cards, gifts, and well wishes. She is beyond joyful and grateful to all that "PRAYnksters" and partners have done for her to make her dream wedding a reality. Isn't it nice when someone so nice gets a blessing!

We're given a glimpse of Kristianna and her groom on their big day. She is gorgeous!

Jeff and his gang are based primarily in Idaho, where they do team-building, inspirational videos, speaking engagements, and more-all with the goal of making people laugh and helping those in need.

YOU MAY ALSO LIKE: Walmart Prank Video Turns Into An Unexpected Prayer Session

"He defends the cause of the fatherless and the widow, and loves the foreigner residing among you, giving them food and clothing." Deuteronomy 10:18