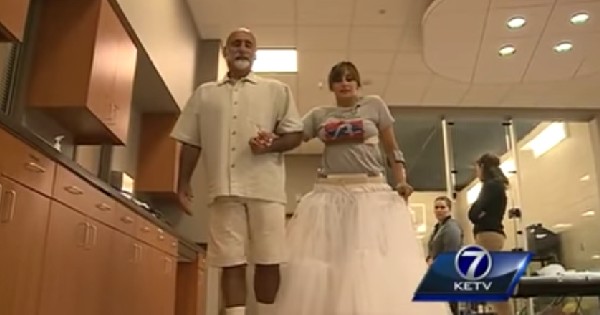 What This Bride Did At Her Own Wedding Stunned Everyone. Grab Your Tissues,This Is Powerful!
Read Article »

In 2005, Augie Nieto was lying in a hospital bed when he came to the conclusion that he’d rather end his life than become a burden to his family. Nieto had just been diagnosed with amyotrophic lateral sclerosis (ALS or Lou Gehrig’s disease) and was feeling completely lost.

When he miraculously survived his suicide attempt, he made a decision right then and there. Nieto said, “I could die from ALS or live with ALS. I chose to live with ALS and make the most of it.”

Over the next three years, he lost leg and arm use. Today, he communicates with facial motions and a device he controls with his feet.

“I’ve learned through my journey with ALS, that there are a lot of choices,” Nieto told The Mighty. “I can choose to celebrate what I do have or mourn the loss of something I can no longer do by myself.”

When his youngest child, Lindsay, was preparing for her wedding, Nieto had to wonder: Would he spend the day celebrating her marriage or mourning that he could not walk her down the aisle?

On his daughter’s wedding day in Rancho Palos Verdes, California, with a device helping him stand upright, Nieto walked her down the aisle.

“This is a goal that is so personal, so much more important than anything I’ve done, simply because it will make Lindsay happy. Seeing her happy is the best motivator.”

“I kind of thought that I would’ve been looking at [my fiance] when I was walking down the aisle, but I couldn’t look at anything but my dad,” Lindsay told Today.com. “I was just amazed he was able to get in his device and stand up. The sun was in his eyes, and I was just thinking that he’s done so much to be here and worked so hard that I just started bawling.”

God truly had a hand in Nieto’s journey and it’s a blessing to see the positive impact Nieto leaves.

“Continue living and don’t give up. You’ll have days you don’t want to, and that’s OK,” he said. “On the other days, focus on what you can do and not what you cannot do.”